Millionaire Co-Founder Of CrossFit Is Planning A Prison Wedding To Marry A Dude Charged With Murder (And No Prenup!) 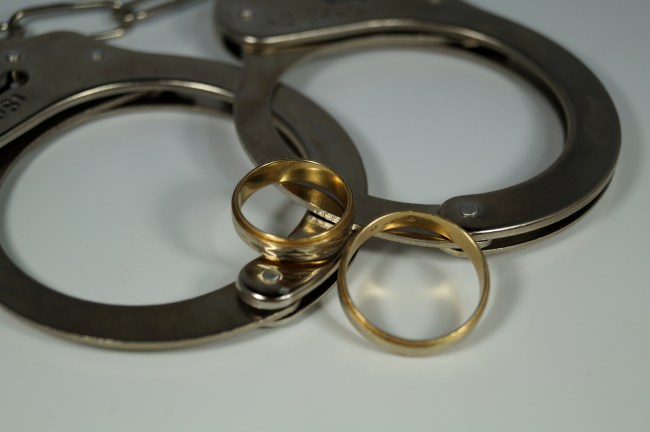 I’ll try my hardest to not make this article about my home state of Florida and its batshit crazy news but I want to at least acknowledge the accused murderer in this case is a ‘Florida Man’ sitting in a Florida prison facing 1st Degree Murder charges.

Now let’s dive into this story…. CrossFit was co-founded by Greg Glassman and (his then wife) Lauren Jenai back in 2001. Having the registered trademark for CrossFit made them immensely rich. It’s unclear what Lauren Jenai’s net worth is but her ex-husband’s net worth is estimated at $100 million according to Celebrity Net Worth and she’s widely reported to be a multi-millionaire.

You’d think that someone with that much money in the bank who made their fortune off a fitness craze would be living out their days in California while exercising around the clock without a care in the world, but you’d be wrong. According to reports, she’s currently planning a ‘prison wedding’ which is exactly what it sounds like.

The man she’s engaged to and plans to marry, Franklin Tyrone Tucker, is currently sitting in Florida prison and faces 1st Degree Murder charges for ‘allegedly stabbing someone a man to death during a robbery’ back in 2017. Franklin Tyron Tucker is a childhood sweetheart of the CrossFit co-founder’s from back in her Philly days and she believes that he’s completely innocent.

The two reconnected on Facebook via chat/Messenger a few years back and she believes he’s completely innocent. Furthermore, she’s reportedly not planning on making him sign a prenuptial agreement to protect her fortune before she marries him in jail:

Tucker was charged with first-degree murder alongside Rory Hank Wilson and John Travis Johnson in the death of Mathew Bonnett.
Bonnett, 59, was killed in November 2017 after he heard a commotion while his neighbor was being robbed at knifepoint.

Prosecutors claim that Tucker and Wilson stabbed Bonnett multiple times as they were leaving the scene. Police believe Johnson was the getaway driver.
All three men were also charged with armed robbery. Tucker also faces a witness tampering charge after he allegedly threatened a witness five days after the murder, according to the Miami Herald.

Jenai has risen to Tucker’s defense since his arrest, hiring a private investigator and a New York lawyer to help his case. The multi-millionaire also told the judge she was willing to post Tucker’s $1million bail.
The mother-of-four, who currently lives in Portland, said she believes Tucker is innocent and was simply an ‘easy target’ for police.

While the pair had begun chatting on Facebook years before Tucker’s arrest, it was the murder case that turned their connection into a romantic one. (via)

This is Lauren Jenai, by the way:

According to PageSix, Jenai sold her CrossFit shares for somewhere around $20 million during her 2013 divorce. Now that she’s fallen in love with the accused murderer, she planned to get married again but only after he posted bond and was released. This didn’t work out as planned but it appears they’re going to move ahead with the wedding anyway:

Jenai — who reportedly sold her CrossFit shares for up to $20 million as part of her messy split from Glassman in 2013 — had told us how she fell for Tucker during their video chats.
“We hadn’t seen each other in 30 years . . . We started having feelings for each other . . . We’re going to get married,” she said.

She’s been fighting for Tucker’s freedom and the two planned to wed when he got out on bond.
But his bail was denied at a Jan. 29 hearing.

Jenai now says they’ll tie the knot at the detention center where he’s been locked up since 2017.

She told us, “We would be allowed to have a wedding in jail . . . [we] would get to be together for the first time in the same room” during their courtship.
She’s hoping the nuptials will be this summer, in part so she can begin to medically advocate for Tucker, who she said suffers from two hernias. (via)

I didn’t realize that ‘hernias’ were enough to get someone out of jail when they’re accused of 1st Degree Murder but I guess I’m not a legal expert nor am I a person with an immense fortune to pay high-powered lawyers.

As for the prenup, she told PageSix “Our relationship is very open and we are a team. I trust him. I love him. My house is his house. A prenup feels a little inappropriate.”

I see no possible way that this relationship ends poorly. This all sounds like true love to me. Nothing weird at all about a multi-millionaire advocating for a man’s innocence when he’s accused of 1st Degree Murder and sits in a Florida jail where the two will get married without a prenup because you can’t place a price tag on true love.

What relationship where the couple fell in love via video chat without spending a ton of time together in person hasn’t worked out perfectly? I predict a fairy tale ending here.