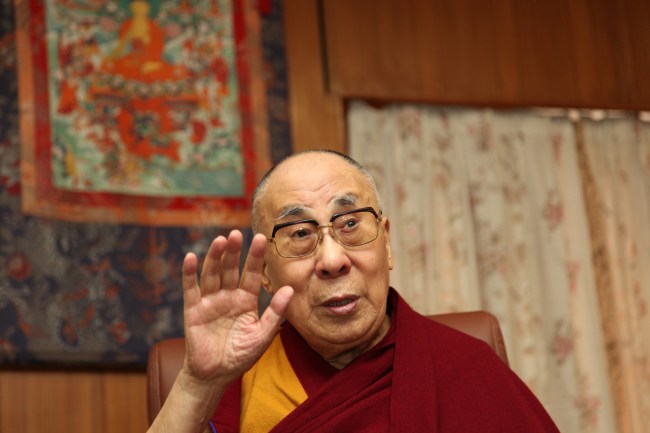 The Dalai Lama proved this week that you can’t spell ‘Enlightened One’ without the letter L.

The 83-year-old exiled spiritual leader of Tibeten Buddhism made international headlines after he let his ‘old man’ show to BBC’s Rajini Vaidyanathan.

Doubling down on comments he made in 2015,  the former Nobel Prize winner claimed that his successor CAN be female *hold your applause* if and only if she’s a sexy little minx.

“If a female Dalai Lama comes, she should be more attractive.” If not, “people, I think prefer, not see her, that face.”

What hope do we have for the future if the universal arbiter of morality says that if you’re ugly, he doesn’t want to see your fucking face?

In any event, the Dalai Lama released a “clarification” message from his office on Tuesday apologizing for his remarks.

“In responding to a question about whether his own reincarnation could be a woman, and suggesting that if she were she should be attractive, His Holiness genuinely meant no [offense],” the statement read. “He is deeply sorry that people have been hurt by what he said and offers his sincere apologies.”

While he explained further that in Buddhism outward and inward beauty matter, the office of the Dalai Lama explains, “His Holiness consistently emphasizes the need for people to connect with each other on a deeper human level, rather than getting caught up in preconceptions based on superficial appearances.” [via Fox]

The statement appeared to suggest that the Dalai Lama was joking when he made the comments, which is about as realistic as the Dalai Lama trying to convince us that someone hacked his account.

“His Holiness, a monk now in his mid-80s, has a keen sense of the contradictions between the materialistic, globalized world he encounters on his travels and the complex, more esoteric ideas about reincarnation that are at the heart of Tibetan Buddhist tradition. However, it sometimes happens that off the cuff remarks, which might be amusing in one cultural context, lose their humour in translation when brought into another.”

The moral of the story is that if you disallow spiritual leaders to get laid, in any religion, bad things come of it. Thank you for attending my TED Talk.