Dana White Is Tired Of People Trying To Cancel Joe Rogan: ‘This Is F–king America’ 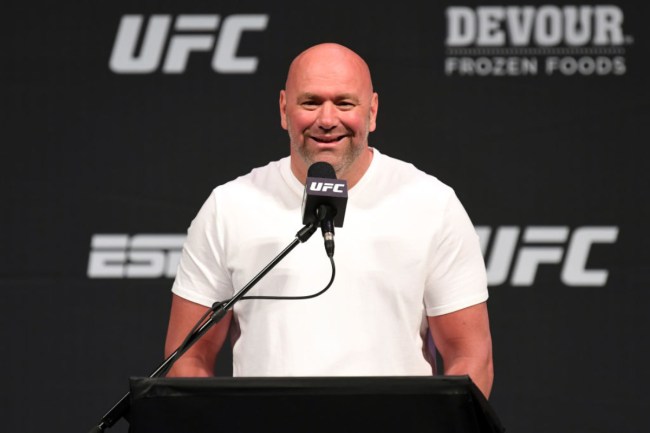 UFC president Dana White is sick and tired of hearing about people trying to cancel his friend Joe Rogan. White’s latest comments defending Rogan are in reaction to the 270 doctors that signed an open letter to Spotify demanding ‘The Joe Rogan Experience’ be censored.

The letter specifically called for Spotify to censor Rogan over his spreading of misinformation pertaining to the virus. It was a direct response to an episode of the podcast that featured Dr. Robert Malone, a virologist recently suspended by the overlords at Twitter.

White recently joined the ‘Full Send‘ podcast and Rogan was a big part of the conversation. The open letter to Spotify was brought up and White pointed out that the vast majority of the 270 doctors that signed it weren’t actual medical doctors.

“Well, I know they had come out and said it was 200, 250 doctors or whatever. I guess when they started researching these people, they weren’t really doctors,” White explained.

White, like many others, see Rogan as someone who can not be canceled. He went on to urge Rogan to continue being himself explaining that this is America, free speech is a thing, and it’s alright to have differing opinions.

“You’re not canceling Rogan,” White said. “The thing is with Rogan, he’s a brilliant guy, he does his homework, and he knows what he’s talking about.”

“And guess what? This is f–king America, and you can have your own opinion about these things, and you can voice them.

“That’s what this f–cking country was built on. And all these little whiny f–cking pu–ies that don’t like it, too f–king bad.”

White sticking up for his friend isn’t going to change anyone’s opinion about the matters at hand, it’s only going to make both sides of the aisle dig their feet deeper. Like White said, this is f–king America.