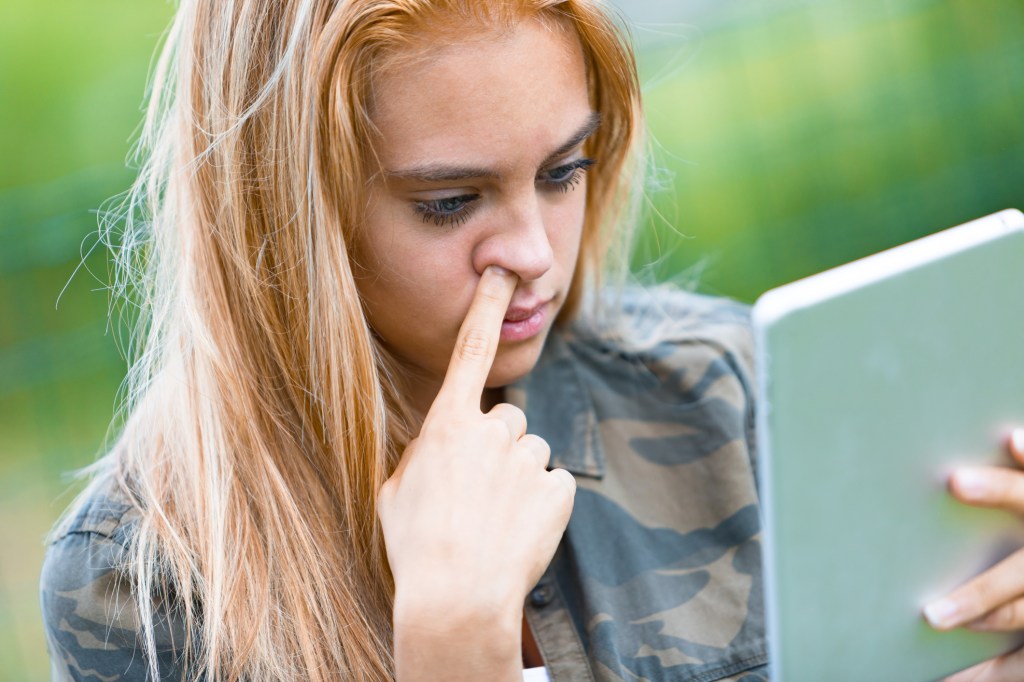 Everyone always looks down at nose pickers as if they are the most disgusting dregs of society. Like going elbow deep inside their nasal cavities to remove excess boogage somehow makes them less civilized than those who use tissues. I’m here to tell you, it doesn’t. The truth is everyone enjoys a good pick from time to time. Yes, even you! It doesn’t matter whether a person graduated from Harvard and makes $16 million per year or if they clean toilets down at the local Walmart for minimum wage. They are all digging around in their noses like they’ve got nothing to lose, and they are loving every minute of it.

Studies have shown that 91% of America admits to being longtime card-holding members of the Booger Pickers Association. The others, well, they are still presumably in the closet, but it’s just a matter of time before their snotty secret is out.

Not too many things in this jacked-up existence feel as good as fishing for lung trout and landing a real humdinger. There’s just something about getting ahold of a thick glob of dried gunk anchored in the deepest regions of a lung and dragging it out of your face that is absolutely satisfying.

But now, medical professionals are saying that digging so close to our brains for boogers could prove detrimental to our health and well-being. It might even kill us dead. Apparently, instead of excavating the nasty and gnarly green funk lodged inside our nostrils, we are actually stuffing them full of all sorts of outlaw bacteria and disease. And these little troublemakers could infiltrate our bodies at any time and launch a savage war that might not be won without life support.

Yep, the great American health expert is trying to make life on this rotten planet even more unbearable than ever before. What started out with us not being able to eat or drink anything that might sabotage our hearts and livers has morphed into a situation where we can’t stand too close to others, we always have to wear masks and everything is getting shut down. But making humanity think they were on the verge of living a deleted scene from Mad Max Beyond Thunderdome wasn’t good enough for the geeks and white coats. No, sir. These people now want us to believe that picking our nose is spreading viral assassins that’ll make us puke, seize up, and lead to the inevitable destruction of a drab society that was already destined for hell.

Listen, as the resident germaphobe, even I am at my wit’s end with all of the fear that’s being peddled now. I knew it was just a matter of time before they started picking on all of us nose pickers. But come on. Humans have been knuckle deep inside their noggins since they were able to reach them. They’ve been flicking boogers across the room, wiping them on gym equipment, shopping carts, and the walls of bathroom stalls across the nation.

And in most cases, even though these lung cookies might be gross and contain a wealth of hazardous germs, they are mostly harmless to the Mofos walking around with healthy immune systems. You know, the defense mechanism that most people are born with that kills bacteria and sickness. If there is one thing that the current global debacle has done to the media-sucking minds of the imbecilic public, it made them forget that humanity has always been under the threat of billions of contagions, and yet, we’re mostly okay. There’s a wealth of microscopic crud floating around out there capable of turning our bodies into puddles of mush. But it’s our immune system that keeps the bugs from winning.

We should be able to pick our noses without fear.

The real threat to health is all of the sugar and overly processed foods that we consume — the lard-ass mentality that keeps somewhere around 40% of the population jiggling and gasping for air all the way to the KFC. We’re an unhealthy civilization, and telling people that they shouldn’t roll boogers isn’t going to prevent some of them from being snuffed out. Unhealthy people are doomed. Nose pickers aren’t necessarily, though. In ways, picking our nose keeps our immune system sharp and on its toes. After all, the U.S. government doesn’t send the military behind enemy lines without allowing them to toss around a few grenades first. They want them to have a fighting chance. Our immune systems are no different. They need to be exposed to all sorts of wicked varmints to learn how to best protect our bodies against anything that tries to take us out. And while a strong immune system requires a balanced diet, exercise and sleep. It also needs germs.

So keep digging in those nostrils, America. It might be a disgusting habit, but it might just keep you alive.