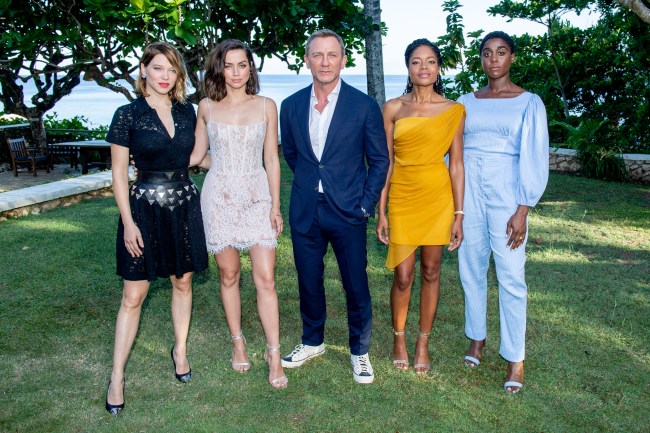 After Daniel Craig’s fourth role as James Bond in 2015’s Spectre, the 50-year-old actor said he would rather “slash his wrists” than return as the British spy. A source close to the actor claimed that knee problems and general exhaustion contributed to Craig’s bullishness on hanging up the tailored suit.

Welp, that was until the 51-year-old actor was reportedly offered north of $66 million to act in the 25th installment in the franchise, and consider Craig’s wrists slashed.

Reports are now starting to circulate that Craig is making filming a living hell for cast and crew, which jives with his reputation of being a huge pain in the ass to work with.

“Everyone on the production side detests working with Daniel, he’s so difficult and makes things impossible. But [Bond producer] Barbara Broccoli thinks he walks on water, and only her opinion matters.”

It’s also been revealed that Craig insisted on having his own personal physiotherapist, chef, and personal trainer while filming in Jamaica for three weeks. According to the Sun, they will then travel around the world with him as filming continues.

A film source said: “Daniel is a perfectionist and his chef will only cook for him.

“That, coupled with having his own trainer with him, means he will be fighting fit for what is a slog of filming schedule.”

Craig’s crankiness may be attributed to the fact that the film is reportedly in shambles, with no title and no finalized script.

“They don’t have a script, there’s no title, it is nearly five years since the last Bond. It starts with a retired Bond living in wedded bliss, but the rest of the script is still being worked over. They rolled out the cast this week at Ian Fleming’s villa in Jamaica because if they wait much longer Daniel Craig, who is 51, will be too old, and then he really won’t do the film.”

It has been revealed that Craig’s autonomy over the film is near ubiquitous–none of the Bond girls in his time were chosen without Craig’s go-ahead, he is prone to have temper tantrums when his creative control is stifled, and a dispute over the script, its writers, and the lead villain is what reportedly contributed to director Danny Boyle bailing on the project in August.

Cary Joji Fukunaga is now at the helm, but a movie that was initially set to hit theaters in November 2019 has now been pushed back to April 2020.