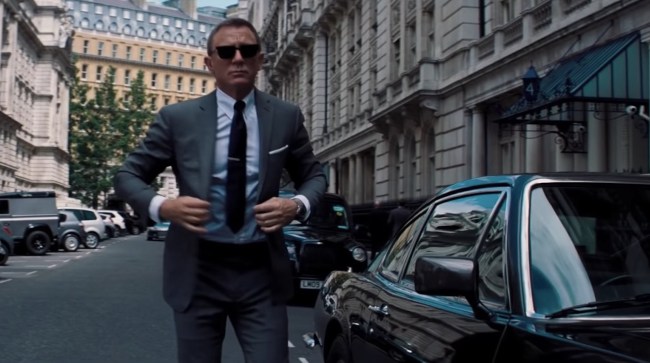 You simply gotta love a good running joke. It’s how series like Arrested Development and How I Met Your Mother and 30 Rock developed such loyal and passionate fan bases: the idea of a running joke is something that makes you feel like you’re *in* on the joke as opposed to just being an observer of it due to the fact that it gets funnier with increasing familiarity and therefore subtlety. Think about “inside jokes” you’ve had with friends over the years — two sides of the same coin.

This is to say that the ongoing way A-list celebrities, from Ryan Reynolds to Jake Gyllenhaal to now Daniel Craig, “treat” Hugh Jackman — who, by all accounts, is apparently one of the nicest dudes in Hollywood, so that’s probably part of the joke itself — absolutely cracks me up. Love a good running joke.

While Reynolds has long been the main proponent of the Hugh Jackman bit, Craig — who was naturally being asked about who will take over the role of James Bond — was quick to join the party of dunking on Jackman as he quickly shut down any speculation of him taking over the title of 007, making sure to include that if it did happen, it would be “over his dead body.”

Amusing guys-being-dudes banter aside, Jackman, 52, is just one year younger than Craig and is therefore obviously out of the running. The same, unfortunately, goes for Idris Elba, who turned 49 earlier in September. Had Craig stepped aside following Spectre in 2015, Elba, then 43, would’ve been a perfect choice. At this stage, though, it feels unlikely. Personally, my money is on former Game of Thrones and Bodyguard star Richard Madden, particularly if Marvel’s Eternals — which will launch him into a new stratosphere of fame — goes well. The 35-year-old is also a Scotsman, which would be a nice homage to the late Sean Connery, the legendary actor who first brought 007 to the big screen.