The ‘Cash Me Ousside’ Girl, AKA Bhad Bhabie, Responds To Blackfishing Accusations, Again 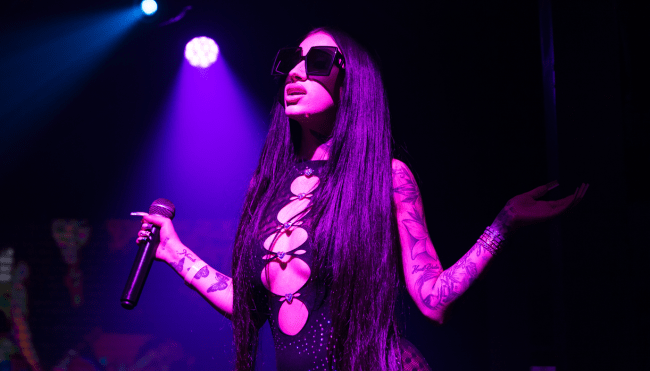 Danielle Bregoli, AKA Bhad Bhabie, AKA the legendary “Cash Me Ousside” girl, has responded to a plethora of allegations that her new look is a form of blackfishing.

Yes, I know, Bregoli, the youngest female rapper ever to appear on the Billboard Hot 100 chart, hates being referred to by her infamous catchphrase, “Cash me ousside, how bow dah?” I just can’t help myself. It’s how I will always know and love her.

This week, however, Bregoli is known for something far worse than the catchphrase that made her famous. At least according to a lot of people on social media.

After the 19-year-old rapper shared another new look on Instagram this week, a whole lot of people went off on her, accusing her of what is known as blackfishing.

Blackfishing is when a white person purposely makes themselves appear black. The term reportedly first gained prominence after journalist Wanna Thompson started a viral Twitter thread about it in 2018.

Can we start a thread and post all of the white girls cosplaying as black women on Instagram? Let’s air them out because this is ALARMING.

Bregoli, who goes by the stage name Bhad Bhabie now, received much backlash after her Instagram post with many people accusing her of doing the same thing.

“Is this not Bhad Bhabie blackfishing? thought I was looking at a black woman on my timeline,” one person tweeted.

“What the Iggy Thee Stallion cosplay is this?!!” another wrote in response to Bregoli’s video.

Of course, Bregoli being Bregoli, she wasn’t going to just let these accusations stand without responding.

Sharing a screenshot of someone asking her what foundation makeup she uses, Bhad Bhabie shot back, “Case closed!” In a second Instagram story post, she added, “Don’t yall ever ask me again why I don’t b on ig! I don’t make no money on here I don’t need to b on here I do it for my fans but y’all take it too far every time it’s honestly sad and weird.”

This is at least the third time Bregoli has been accused by a swath of people of blackfishing. It happened in 2020 when, again, her skin appeared darker, and in 2019 when she had her hair done up in box braids.

“Who WANTS to be black? I don’t really understand that”
-Bhad Bhabie, defending her blackface, April 2020