Danielle Bregoli, AKA Bhad Bhabie, Loathes All The ‘Cash Me Ousside’ Memes: ‘I Hate It So Much’ 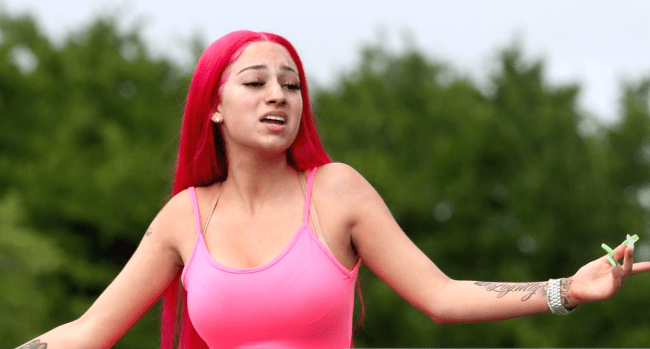 Can you believe it has been more than four years since Danielle Bregoli, aka Bhad Bhabie, went on the Dr. Phil show and dropped the now infamous catchphrase, “Cash me ousside, how bow dah?” on the world.

Back in September of 2016, Bregoli was just a troubled 13-year-old kid living in a home that was a favorite place for the local police to visit.

Now, Bregoli will turn 18 on Friday, March 26, has become the youngest female rapper ever to appear on the Billboard Hot 100 chart, has signed a million dollar record deal, numerous endorsement deals, and has spent time in rehab for prescription pills and trauma.

On Tuesday, Bregoli posted a video in which she talks about how much she now hates the numerous “Cash me ousside” memes she’s inspired since her legendary Dr. Phil appearance.

“My problem with the meme was always that people only got to see half the story,” she says in the video. “For years I didn’t even want to talk about it. People would say it and I would just be like, okay yeah, whatever.”

After a stay at the Turn-About Ranch rehabilitation facility following her Dr. Phil appearance, Bregoli says she couldn’t believe how much the phrase had blown up on the internet.

“I was gone in a program for six months in the middle of nowhere,” she remembers. “I had no phone, no internet, no none of that. I didn’t see this ’til I got home. I turned on my phone and I seen my face everywhere.”

Bregoli also claims the producers of the Dr. Phil show twisted her responses to make her look bad.

“That meme made it seem like I was an evil, hateful girl,” says Bregoli. “That’s why I hate it so much because that’s not me… Y’all can’t judge somebody’s whole life off of a 30-second clip… I always wanted people to know me for me.”

The thing is, that phrase is really what made her famous – something that she does actually acknowledge – she just would like to have people move on from it.

That video comes on the heels of another one Bregoli posted to YouTube last week where she claims when she was 13, after appearing on Dr. Phil, she was kidnapped in the middle of the night, handcuffed, and taken to the Turn-About Ranch.

She also detailed alleged abuse suffered at the ranch including being forced to sit up for three days straight, not being allowed to shower, and being mistreated by the staff.

“I’m not really sure why Dr. Phil still sends kids here, it really doesn’t make sense,” Bregoli said in the video. “Are you trying to help them or are you trying to hurt them even more? I mean we all know he’s a phony as it is, but like, don’t be sending kids somewhere just to make it look like you’re trying to do something.”