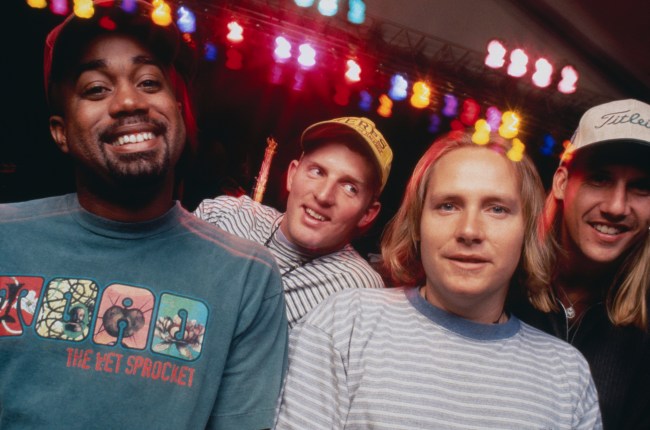 It’s virtually impossible to overstate the cultural impact that Hootie and the Blowfish had in the 1990s (mainly on frat party culture).

1994’s Cracked Rear View was certified Platinum 21 times and is the 19th best-selling album in US history. It was the best-selling album of 1995 and it produced multiple hits/bangers including ‘Let Her Cry’, ‘Time’, and ‘Only Want To Be With You.’

This Summer we celebrate the TWENTY FIFTH anniversary of Cracked Rear View which will see Hootie & the Blowfish reunite to go on a 44-city tour with the Barenaked Ladies. The tour began on May 30th in Virginia Beach and it culminates on September 13th in Hootie’s hometown of Columbia, South Carolina, home of the Gamecocks and the city where Darius Rucker and the band got together.

Darius recently sat down with the New York Times for an interview to talk about this Summer’s 25th-anniversary tour and what he’s been up to and life as a Country Music superstar. Throughout the interview, the topic of Hootie & The Blowfish’s cultural impact on the 1990s came up in the context of CNN’s docuseries The Nineties (which you can watch on Netflix). Tom Hanks was one of the executive producers of that series and Darius Rucker didn’t mince words with how he felt about Hootie’s omission from The Nineties.

Here’s an excerpt from SPIN:

frontman Darius Rucker takes issue with the fact that Hootie’s impact has seemingly been quietly erased from rock history. This feeling most hit home, Rucker says, when he watched an episode of CNN’s docuseries The Nineties, on which Tom Hanks served as an executive producer.

“How the [expletive] can you do a show about ’90s music and not mention Cracked?” Rucker told the Times. He added: “[Expletive] Tom Hanks!” The Times, per tradition, omitted the curses in question here, but we’re just gonna go ahead and assume he said “Fuck Tom Hanks.” (In fairness to Hanks, he is but one of several executive producers, and 19 producers overall, attached to the series per its IMDB page. (via SPIN)

Can we just acknowledge that Darius Rucker’s relevance is 100% limited to the Country Music industry these days? He blew up on the radio for taking an Old Crow Medicine Show song, ‘Wagon Wheel’, and putting his own spin on it. People fucking LOVE to say that this was a Bob Dylan song despite Dylan being responsible for only a small portion fo the track.

It’s an Old Crow song and everyone fucking knows it. Hootie brought it to the mainstream. Darius has dropped other Country Music chart toppers but it was Old Crow that helped his solo career really explode.

Hootie & The Blowfish might not have been ‘erased’ from rock history if they didn’t completely disappear after immense success, but they did. He still has a legitimate gripe here, there’sno reason they shouldn’t have been mentioned in The Nineties other than the fact that this small docuseries was trying to fit in an entire decade into a few episodes.

Other parts of the interview are interesting as well, including this bit about the true meaning of some other mainstream songs:

Later in the profile, Rucker discusses how “Hold My Hand,” the band’s seemingly feel good breakout single, is actually a rebuke of racism. According to the frontman, the single is “a protest song” which was “always about racism.” Rucker recounted instances where he was on the receiving end of racial slurs at frat parties, including an incident at a University of Tennessee where a white student praised the band’s performance before saying something bigoted about Rucker. “He just said that right in front of me,” Rucker said. Hootie drummer Jim Sonefeld added that seeing the bigotry Rucker endured “made us a tighter fellowship.” (via SPIN)

This appears to be a 100% non-beef that the New York Times printed in the interview which doesn’t show the context. Darius Rucker is a natural joker. He talks on stage A LOT and cracks jokes. He’s a people person.

I’m absolutely certain this was all meant in jest but you don’t get to see that in print and now the Internet’s running wild with this ‘Darius is going to fight Tom Hanks in the streets’ narrative but I’m still 100% here for that because this could develop into the funniest beef war of 2019 and potentially culminate with a late-Summer Saturday Night Live sketch if we’re lucky.

Despite this being a beef war that probably won’t get off the ground, the question remains: who ya got: Tom Hanks or Darius Rucker?

To read the full New York Times profile on Darius Rucker you can just click that link!