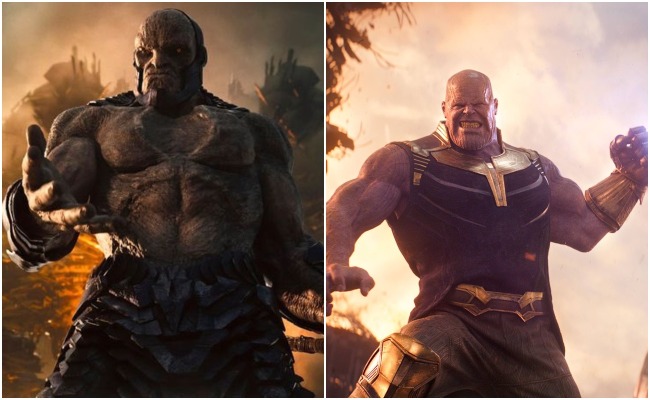 In the lead up to the release of Zack Snyder’s Justice League, HBO Max has been rolling out character-centric teasers that have resulted in the film’s best pieces of marketing, as these minute-long trailers have done an excellent job of highlighting the gravitas that each individual character brings to the table.

Leading with Batman, the teasers have worked their way through the entire Justice League, highlighting Superman, Aquaman, Flash, Wonder Woman, and Cyborg, in that order. Following yesterday’s Cyborg teaser, you would assume that because the entire Justice League has already been featured, that the teasers would stop, right? As the great Charlie Murphy once said in reference to thinking Rick James would *finally* chill the fuck out after getting his legs beaten: “Wrong! Wrong!”

Earlier today, HBO Max dropped a teaser featuring the Snyder Cut’s villains, Steppenwolf and Darkseid, serving as a reminder of the massive threat facing the Justice League. Even for the staunchest Snyder haters, it’s nearly impossible to not find yourself hyped for that ancient battle sequence that sees Mankinds, Amazonians, and Atlanteans all fighting side-by-side for the good of the planet.

Given the history of the Snyder Cut, it can be easy to be so all consumed by its sum, that you forget how iconic its parts are. Like, here’s fucking DARKSEID. *The* most powerful DC Comics villain. He’s here now! Live in the flesh. Imagine telling yourself five years ago that Darkseid would make his debut on a streaming service. What a world we live in.

Because of this sudden introduction, though, Darkseid obviously isn’t getting the nearly decade-long build-up that Thanos had, thus blunting how momentous his arrival truly is. And because of that, the character likely won’t recieve the recognition and respect he deserves, particularly when it’s in relation to his Marvel counterpart, Thanos.

Now, any fan worth their salt knows that Darkseid was the first of the bald purple god-like beings to enter the comic book world when he debuted in November of 1970 (Thanos would arrive in the Marvel Universe three years later). Beyond that detail, though, you’d be forgiven if you weren’t well-versed on the intricacies of their respective powers and skill-sets. That’s where I come in.

In the source material — and this is a rough, rough outline of what happens — there is an arc where Thanos essentially switches sides because he doesn’t deem himself a worthy God, leaving Nebula ultimately steal the Infinity Gauntlet and reign terror on everybody.

Toss in the fact that Thanos was (originally) willing to let 50% of all beings live, and you arrive to the conclusion that he doesn’t have that same killer instinct that Darkseid possesses. Thanos was all like “If half of you eat this L, I’ll leave you alone and go fuck off to my cosmic ranch”, while Darkseid is more rocking with the “I shall enslave you and every other living being in the universe for the rest of eternity” mentality. You tell me which one would be more terrifying if they arrived on Earth’s doorstep. Lest we forget, had Peter Quill not acted like a complete jackass, Thanos would’ve lost to a ragtag group of Avengers that had only just met each other, despite having a handful of Infinity Stones at his disposal. Thanos is a mortal playing god — Darkseid is a god playing with mortals.

There’s also the basic physical element: Thanos’ power is derived from his Titan DNA, while Darkseid’s comes from the use of Omega Beams, which are powerful enough to harm Kryptonians, destroy planets, and fast enough to catch speedsters. Darkseid could literally cut Thanos in half with a single gaze.

All that said: no Infinity Gauntlet at Thanos’ disposal? We’re taking Darkseid in five games. A gentleman’s sweep.

Thanos: “If half of you just eat this L I’ll leave you alone and go fuck off to my cosmic ranch.”

Darkseid: “I shall enslave you and every other living being in this universe for the rest of eternity.”