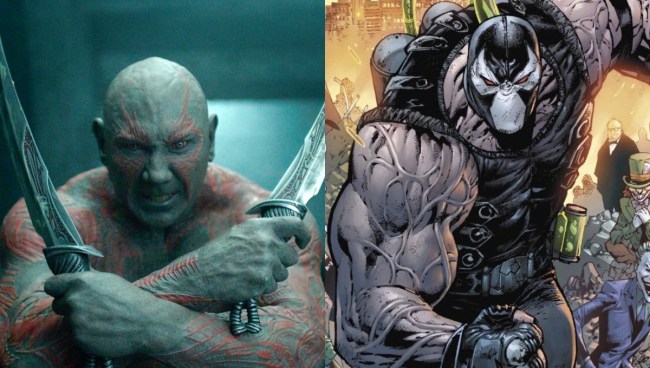 There’s a semi-hot take out there that Dave Bautista is the best actor to come out of the WWE, and honestly, I’m beginning to believe it.

Now, to be clear, The Rock is a much bigger movie star — there’s absolutely no denying that. The man is a powerhouse of charisma that has become a business unto himself. If Dwayne Johnson is headlining your movie, odds are that it’ll make, at least, half-a-billion dollars. He’s got The Jungle Cruise coming out this summer with Emily Blunt, and you can almost guarantee it’ll be a massive hit and launch, yet another, franchise. I love The Rock and what he brings to Hollywood.

But when it comes to pure acting, that’s a different story. Think about Bautista’s five minutes in Blade Runner 2049 — that’s arguably more complex emotional work than Johnson has ever done. And that, more so than his obvious physical resemblance, is what makes Bautista arguably the perfect choice to be the next Bane, if Warner Bros. chooses to go down that route. The Army of the Dead star certainly wants the job, as he recently revealed during Justice-Con that he even met with the studio about the role.

“Oh, it would be Bane all day long. I’ve made no secret about this. I want to play Bane so bad I went to Warner Bros., had an appointment with them, had an appointment with DC, walked in the door and said, ‘I want to play Bane.’ I’m not kidding. They were a little like ‘Woah, we’re not even casting Bane.’ I was like ‘I don’t care, I’m playing him.'”

With Robert Pattinson’s The Batman franchise set to get up and running next year, there’s certainly an opportunity to introduce a new version of Bane in the subsequent sequels. As far as we know, Riddley, Penguin, and Catwoman will be the villains in 2022’s The Batman, with some fans also speculating that the Court of Owls could be introduced. The Batman seems to be taking a hyperrealistic approach to Gotham’s world, and a character like Bane — who’s essentially a mercenary — would fit right into that.

RELATED: Movie Casting Couch – Who Should Play Joker In ‘The Batman’ Franchise?