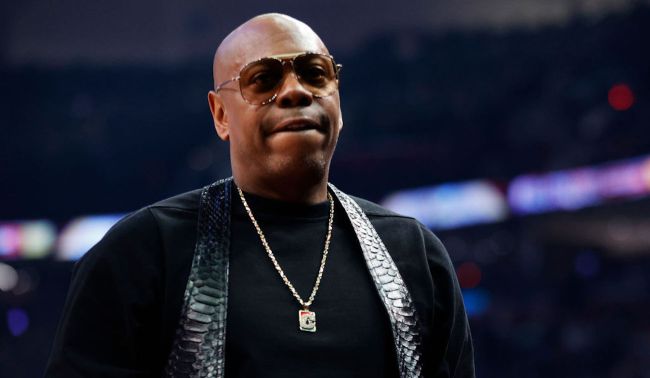 During his set at the Hollywood Bowl for the Netflix Is A Joke festival, comedian Dave Chappelle was attacked on stage during his set. Chappelle, 48-years-old, was rushed on stage by a male assailant who was reportedly carrying a fake gun and a knife. The suspect has been identified as 23-year-old Isaiah Lee.

According to a report from Vanity Fair, Chappelle’s set — which featured appearances from comedians such as Jeff Ross, Michelle Wolf, Jimmy Carr, Sebastian Maniscalco, and Jon Stewart — “seemed at odds with itself, pivoting wildly between Supreme Court takedowns and rallying cries against cancel culture.”

The report states that comedian Jimmy Carry made jokes about the trans community, which received a “roar” from the crowd:

Carr eschewed the normal conventions of stand-up to read a series of offensive and “cancellable” jokes mostly pertaining to the trans community. “They’re jokes,” he said repeatedly in between punchlines, to the roar of the crowd.

Carr was later followed by former The Daily Show host Jon Stewart, who reportedly spent his time on stage speaking about Roe v. Wade and Russia:

Jon Stewart was evidently less concerned with telling jokes on Tuesday and more concerned with railing against the government, continually returning to recent news regarding the leaked SCOTUS draft that would overturn Roe v. Wade. “What the f–k are we doing?” he repeated multiple times, clearly upset.

Stewart said that he “wrote a bunch of stuff in the hotel” before launching into an emotional tirade about the state of democracy in America. “It’s over. You have to have babies,” he lamented.

Stewart continued on the political beat, telling jokes about the war in Ukraine while comparing Vladimir Putin to Hitler. His progressive material, off-the cuff and not fully formed, didn’t seem to land with the pro-Chappelle audience. [via Vanity Fair]

Despite the attack, Chappelle ultimately got back on stage to close out the show, shouting out his friends Jamie Foxx and Busta Rhymes in the process for having his back.

“Whenever you’re in trouble, Jamie Foxx will show up in a sheriff’s hat,” Chappelle hilariously said.