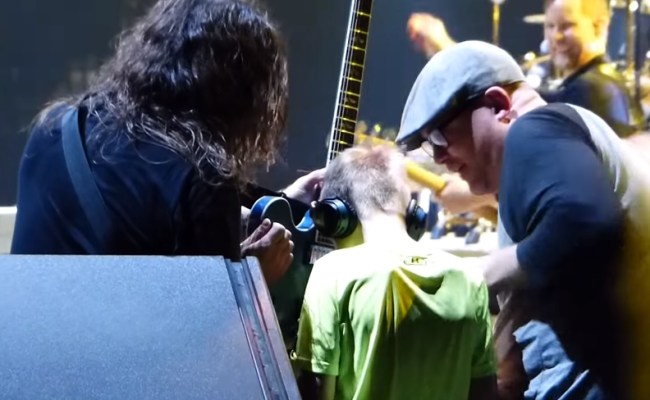 Good Guy Dave Grohl strikes again! The Foo Fighters frontman brought a special guest on to the stage during a concert in Minnesota on Saturday night and it was an absolutely heartwarming moment.

A week after bringing a 10-year-old boy on stage to play Metallica’s “Enter Sandman,” Grohl was once again making dreams come true as he invited a disabled boy and his family on stage to watch the Foo Fighters concert in St. Paul.

Dave stops song when he spots an exhausted child in the front with his dad and he offers them a seat on the stage. #FooFighters #MyXEC @foofighters pic.twitter.com/QMMw10MOSG

Grohl not only gave 10-year-old Owen Anderson the best seat in the house for the Foo Fighters concert at the Xcel Energy Center, but also gave the boy a chance of a lifetime by playing with the legendary band.

At one amazing point, Grohl lowered his guitar so Owen could play a couple of riffs along with the rest of the band. “Dave Grohl and all of the crew were incredibly kind to our family,” Stacy said.

You can watch Owen playing guitar around the 3:10-mark.

Owen’s mom, Stacy Anders, gave some more details about the awesome moment and how great her son is. “We have taken Owen to close a 100 shows. It’s so fun and he brings out the best in so many people. Owen has a pretty huge story and has been through so much in his life already, we are just trying to give him the best life we can.”

“Owen is in fact blind, he also has autism, Crohn’s Disease, and developmental disabilities,” Stacy said of her son. “Owen loves concerts so much. He was definitely not tired, he likes to be held up front at most shows and we take turns hold him up so he can dance.”

The Foo Fighters also played a mashup of Van Halen’s “Jump” and John Lennon’s “Imagine” that is unlike any other.

The Foo Fighters perform the Greatest Mashup Ever.

Sadly, the Concrete And Gold tour only has two more stops until it is gone forever with the Foo Fighters playing on October 22, 2018, in Edmonton, Canada; and October 23, 2018, in Calgary, Canada. The Foo Fighters will “take a break” after their grueling world tour that happened over 16 months. “You kind of set these goals for yourself,” Grohl said. “To see if you can do it again. So here we are at the last set of shows we’ve been on for a year and a half, and I’m ready to take a break but I’m ready to do it again at some point.”

“When we start making records, it’s almost like I don’t hear the song as much as I can see them in my head,” Grohl explained. “I don’t read music, I see music in kind of shapes and patterns. So I can see the next record. I know that there is another one there. I don’t know when but I think I know what we should do.”

Last week, comedian Jim Breuer was filming backstage before the Metallica show in Milwaukee where Grohl and Foo drummer Taylor Hawkins were drinking beers. Which is what Grohl does very, very well according to his intense pre-concert drinking ritual.