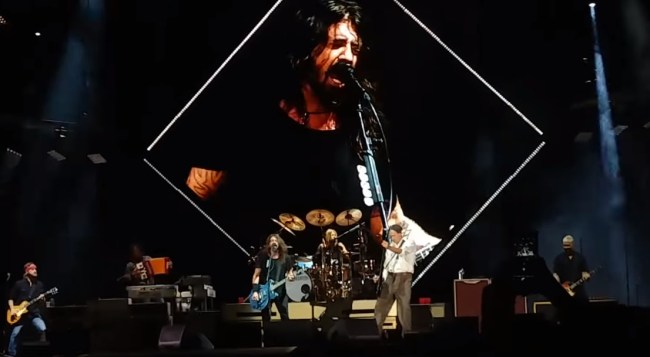 A complete reunion of Nirvana can never happen for obvious reasons, but we got a partial reunion of the surviving members of the great American grunge rock group. Krist Novoselic joined Dave Grohl and the Foo Fighters on Saturday night in the perfect Seattle homecoming.

The exuberant crowd at Safeco Field didn’t get Nirvana music, but they did get music from a band that Kurt Cobain treasured. Former Nirvana bandmates Novoselic, Grohl, and Pat Smear played a cover of “Molly’s Lips” by The Vaselines. Cobain covered The Vaselines several times decades ago and recorded their version of “Molly’s Lips” and released the cover song on their 1992 album “Incesticide.”

One of the many highlights from tonight’s @foofighters show… seeing @KristNovoselic join them on stage to perform The Vaselines song “Molly’s Lips” (a song that @Nirvana covered quite a bit)! #FooFighters pic.twitter.com/aEGDiNmNYo

Novoselic’s new band Giants In The Trees opened for the Foo Fighters earlier in the night.

You might see another Nirvana reunion at Cal Jam 18 on October 5 and 6 at San Bernardino’s Glen Helen Regional Park where the Foo Fighters and Giants in the Trees both are scheduled to perform.

THANK YOU SEATTLE!! 🤘
THANKS @KristNovoselic AND @InGiants FOR JOINING US!!
LET'S DO IT AGAIN AT @caljamfest!!https://t.co/9Pl1mshyFe

RELATED: Charles Barkley Got A Contact High From ‘Nirvana’ When He Was Hosting ‘SNL’ In 1993