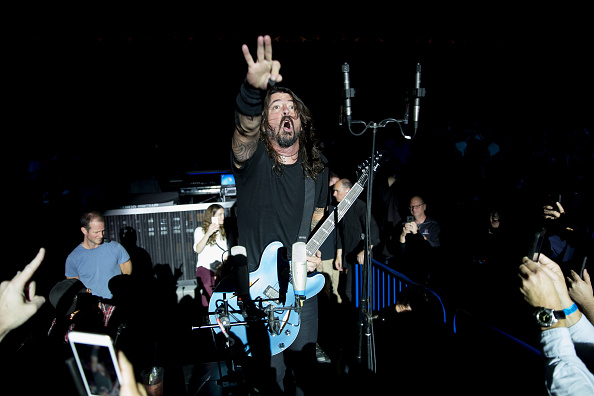 If you could party with any celebrity right now, you couldn’t go wrong with saying you’d like to gulp an adult beverage or three with Dave Grohl. A few weeks ago, we learned about Dave Grohl’s extreme pre-show drinking ritual that is aggressive to say the least. So that means everyone is going to be hammered. But the another great aspect of partying with Dave Grohl is that he has a net worth of $280 million and he will take care of the bill. And then some.

On August 26th, a band called “The Holy Shits” performed at the Hollywood Palladium, which turned out to be a secret show for the Foo Fighters. After the covert concert that was to promote the band’s Cal Jam festival, Grohl partied at the iconic Rainbow Bar & Grill on the Sunset Strip and did shots with fans.

Ended the night at a bar with Dave Grohl after a secret Foo Fighters Show! That’s three times we wound up at the same bar now lol #barmates #foofighters #losangeles

Grohl also took photos with a Kurt Cobain doppelgänger named Gabe Maska, which blew the minds of rock enthusiasts at the bar.

Here are some more… thanks @michaeleivazphotography

After the beers and shots of Jager, Grohl took care of the bill in a rock star way. The bar bill ended up to be $333.30 and he couldn’t quite figure out the 20% tip due to a few too many brews. So instead the Foo Fighters’ frontman paid homage to Led Zeppelin, Black Sabbath, and other classic rock bands who have embraced the occult. Grohl gave a $333 tip on a $333 bill for the sole purpose of adding up to $666 or the number of the beast.

Lucky for the bartender that the bill’s total was $665.