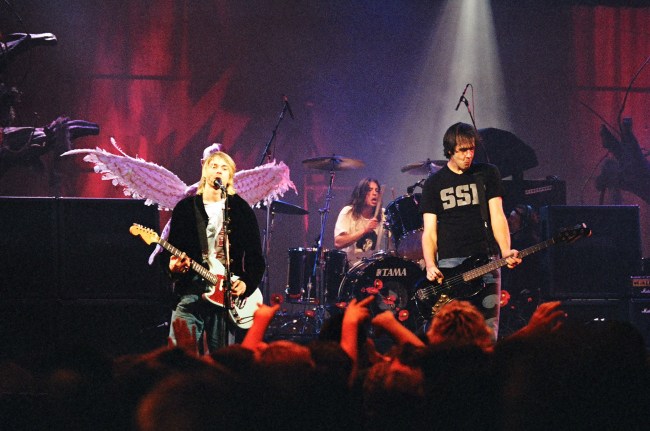 Kurt Cobain‘s struggles with drugs have been well-documented. Now decades later, Dave Grohl has come forward to tell the story of exactly how severe Cobain’s drug addiction was and how it affected Nirvana’s touring.

In a recent interview with Kerrang!, the Nirvana drummer talked about how everybody knew about Kurt’s overwhelming drug addiction. The year was 1992 and Nirvana was scheduled to perform at the Reading Festival in England in August. The music festival dates back to the 1970s and has hosted other legendary bands such as The Rolling Stones, Fleetwood Mac, The Kinks, Pink Floyd, The Who, Cream, and Black Sabbath.

“Reading changed me. I grew up with it, so headlining was unbelievable,” Grohl said of playing at the iconic music festival.

“Then I saw it on our itinerary in ‘91, that we’d be halfway up the bill with Sonic Youth and Iggy Pop, and from the day I saw that on there, to the minute I walked out onstage, I would wake up every fucking morning in a panic attack that I had to go and play in front of that many people,” Grohl added.

“In the 12 months between Reading ’91 and Reading ’92 when we headlined, the band had exploded… and imploded,” Grohn explained. “We went from being a three-piece band in a splitter van with a tour manager and a monitor guy, to selling millions of records, and a lot changed. It was a pretty chaotic 12 months.”

Then Grohl detailed Kurt’s struggle with drug addiction. “Kurt got strung out and wound up having to go to rehab. I remember we finished that tour in early ’92, and we had toured America, we had toured Europe, we’d been to Australia and Japan, and we ended in Hawaii.”

“By the time we got there [Hawaii] we thought, ‘Okay, we need to fucking chill out, because the world has gone crazy – not just ours but everybody else’s.’ So, we took a break, and in that time Kurt had a kid, and had his ups and downs. It was chaos,” the Foo Fighters’ frontman said of the tumultuous times of the band.

“I remember showing up to Reading ’92 and there being so many rumors that we weren’t going to play, that we had canceled,” Grohl told Kerrang!

RELATED: Kurt Cobain Knew Dave Grohl Had An Incredible Voice And Was Jealous Of His Talents

“I walked backstage and some of my best friends in bands that were opening would see me and say, ‘What are you doing here?’ And I’d go, ‘We’re f*cking headlining!’ And they’d be like, ‘You’re actually going to play?!’ I didn’t realize there was any question that we were going to play,” Grohl stated. “I knew within myself I was questioning if we could play, but I knew we were going to try.”

“The show was a really reassuring, genuinely magical moment of everything coming together at the right time,” Grohl added. “I think we had practiced once, the day before, and I just didn’t know if we could pull it off.”

Grohl revealed that this wasn’t the first time that Nirvana winged it. “That happened a bunch of times in Nirvana, where you’d think, ‘God, this is going to be a f*cking disaster,’ and then it would turn out to be something beautiful.”

Dave has a regret from his Nirvana days. “So yeah, it went great, but it’s sad that that’s the last time we ever played England, because it could have been better. We just didn’t play England enough, I don’t think. The memory is somewhat triumphant but melancholy, because we never came back.”

You should check out the entire Dave Grohl interview over at Kerrang! because Grohl also revealed what his favorite shows and venues are.