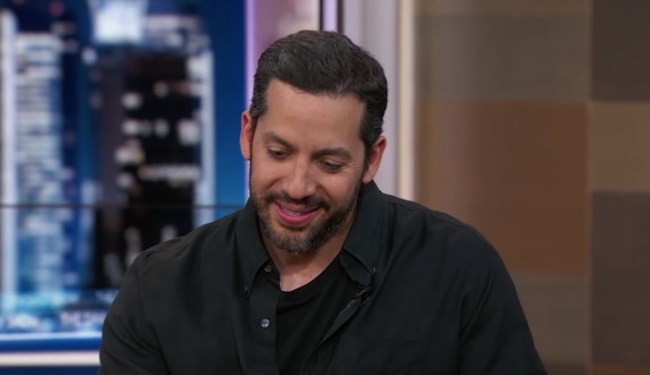 Street Magic magician David Blaine is a friggin’ warlock. He’s caught bullets in his mouth and he can levitate. Blink for even a second and David Blaine will swipe your watch and 60 seconds later you’ll find it hitten inside of your rectum like Christopher Walken with the pocket watch in Pulp Fiction.

David Blaine has been buried alive and he’s also been frozen inside of an ice block for nearly 64 hours. He spent 44+ days inside of a plexiglass box in London where he drank 1.2 gallons of water each day but didn’t eat any food at all…The man is a freak.

He’s recently embarked on a North American tour which kicked off on Sunday, May 6th in San Diego and will wrap up at the Kings Theatre in Brooklyn on July 14th. As a guest last night on The Daily Show with Trever Noah, David Blaine talked about how it was Jon Stewart who helped him get his first big break on TV as a young magician. After that, David stuck an ice pick through his hand to prove that he’s capable of making Trever Noah very uneasy:

David Blaine’s one of those people that I often have trouble believing him and I are cut from the same cloth. We eat the same food, drink the same water, but he then sticks a goddamn ice pick through his hand like an evil black magic warlock.