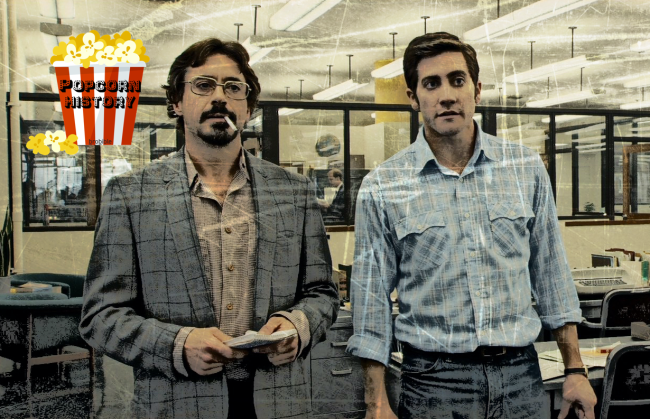 Welcome to our Popcorn History, which will explore the stories behind some of Hollywood’s most iconic films, characters, and stars.

Episode Three: The ‘Black Panther’ Cast Had An Unbelievable Nickname For The Only Two White Dudes On Set

Today — March 2 — is the anniversary of the release of David Fincher’s Zodiac, a film that many would agree is among the director’s best (that, and The Social Network), and that some argue is one of the best of the 21st century. I land somewhere in between.

Regardless of how you ultimately rank its legacy in the pantheon of crime films, there’s no denying that Zodiac is excellent, particularly due to the performance of its three lead actors: Jake Gyllenhaal, Mark Ruffalo, and Robert Downey Jr., who, at the time, was at the dawn of his reborn career.

Within the film community, the history between Gyllenhaal and Fincher is well-versed, as the singular director famously (or infamously, depending on how you feel about it) made the still-young-actor perform over 70 takes of certain scenes, leading to some reported on-set tension.

“Jake was in the unenviable position of being very young and having a lot of people vie for his attention, while working for someone who does not allow you to take a day off,” Fincher told the New York Times last Fall. “I believe you have to have everything out of your peripheral vision. I think Jake’s philosophy was informed by — look, he’d made a bunch of movies, even as a child, but I don’t think he’d ever been asked to concentrate on minutiae, and I think he was very distracted.”

Despite this famed tug-of-war between the iconic director and his star, Gyllenhaal was always Fincher’s first choice for the role of obsessive cartoonist Robert Graysmith, as he obviously knew what a generational talent he was and would still become.

Had Gyllenhaal not taken the part, though, Fincher’s second choice was Orlando Bloom, who was at the height of his Pirates of the Caribbean /Lord of the Rings fame.

An equally interesting sliding doors moment comes in the form of Fincher’s alternate choice for Paul Avery: before deciding to cast the on-the-comeback RDJ, Fincher wanted to employ Se7en and Fight Club muse Brad Pitt in the role. The pair would ultimately reunite for 2008’s underrated The Curious Case of Benjamin Button.

Ultimately, Fincher landed on the right choices, as Pitt may have been too glossy to play the disheveled Avery, whose lifestyle was far more in line with that of Downey Jr’s past. The now-record-breaking actor was right in that sweet spot between the troubles of his 30s and the historic renaissance of his 40s, making him a character actor who didn’t take up too much of a scene’s oxygen at the time, but can now be viewed as global megastar putting in a shift in a prestige drama in hindsight.

As for Bloom’s missing out on the role of Graysmith, while he’s gone on to maintain a respectable career, Gyllenhaal has gone on to become one of the elite leading men of his generation, thanks in large part to his growth in films like Zodiac. Plus, Bloom and Pitt turned out just fine.

Had David Fincher not been able to cast Jake Gyllenhaal and Robert Downey Jr. in 'Zodiac', his next choices for the roles were Orlando Bloom and Brad Pitt, respectively. pic.twitter.com/Rd6h3LpJR1