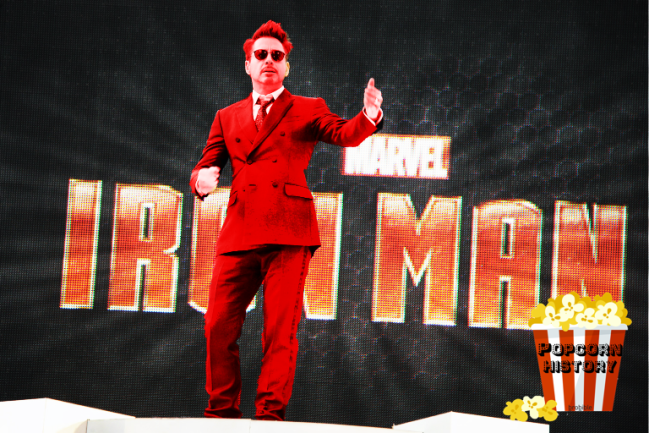 Welcome to our feature series Popcorn History, which will explore the stories behind some of Hollywood’s most iconic films, characters, and stars.

When it comes to comeback stories in pop culture, there are few as well-known as Robert Downey Jr’s.

In the early 90s, when he was just 27-years-old, he was nominated for Best Actor at the Academy Awards for his portrayal of entertainment legend Charlie Chaplin. Just as he was entering his 30s, though, his career began to curtail as his life began to spiral, as he was arrested numerous times on drug-related charges in the late 90s, beginning with a 1996 Los Angeles arrest that found him in possession of cocaine, heroin, and an unloaded .357 Magnum handgun.

This pattern would continue for about five years, as Downey would go through a cycle of substance abuse, subsequent arrests, rehab stints, and relapses — rinse and repeat. 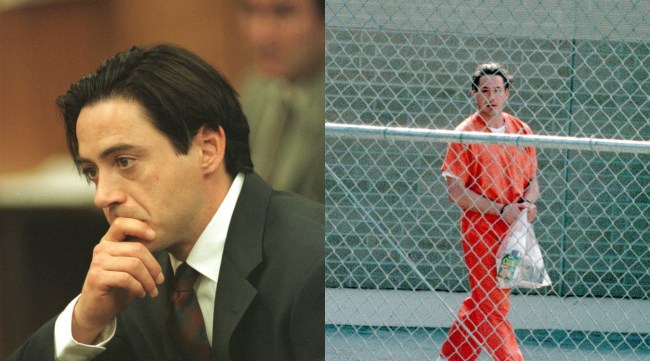 Finally, though, after what would prove to be his last arrest in April 2001, Downey Jr. got clean and was ready to begin working again. And yet, despite his proven and obviously immense talent, the Academy Award nominee found it difficult to secure acting jobs, as production studios were unable to obtain insurance for the troubled actor, thus making hiring him all the more difficult.

Coincidentally enough, Downey’s breakthrough back into the industry would come thanks to an actor would go onto to disgrace himself in the coming years: Mel Gibson. Gibson, who was a close friend of Downey’s since the pair starred in Air America, paid Downey’s insurance bond for the 2003 film The Singing Detective, paving the way for him to be cast in Gothika alongside Halle Berry, although 40% of his pay was withheld until filming wrapped.

From there, the career comeback was officially full steam ahead, as Downey was then cast to star alongside Val Kilmer in the cult black comedy crime hit Kiss Kiss Bang Bang, which was the directorial debut of famed screenwriter Shane Black (who, as fate would have it, would go on to direct Iron Man 3). In the coming years, Downey would continue to inch back into the mainstream, as he’d go onto star in critically-acclaimed films such as Good Night, and Good Luck, A Guide To Recognizing Your Saints (an awesome movie that I suggest you check out), A Scanner Darkly, and Zodiac.

Downey Jr. was a working actor again, but the question then became whether or not he could truly reignite his A-list career and become the movie star he once looked destined to be. That question was answered with aplomb in 2008, as he would go onto star in two career-defining films: his Academy Award-nominated turn in Tropic Thunder, and, of course, as Tony Stark in Iron Man. But how exactly did Downey Jr. convince Marvel Studios to cast him as the centerpiece of the newly created Marvel Cinematic Universe? Jon Favreau, that’s how.

Favreau, the Swingers star who would go onto direct Iron Man and Iron Man 2 — says he knew RDJ was the right man for the role and fought the studio tooth and nail for the casting to happen.

Favreau opened up about casting Robert Downey Jr. during a recent interview with the Texas radio station 100.3 Jack FM, and revealed to the hosts that while Iron Man he brought up the idea of casting Downey Jr. in the lead role and was rejected multiple times. Despite all the negativity and wariness surrounding the suggestion, however, the director didn’t take “no” for an answer and instead made it his responsibility to show the people at Marvel Studios that he knew exactly which actor he wanted to play the starring role. Said Favreau, “It was my job as a director to show that it was the best choice creatively…and now the Marvel Universe is the biggest franchise in film history.”

“Everybody knew he was talented… Certainly by studying the Iron Man role and developing that script I realized that the character seemed to line-up with Robert in all the good and bad ways. And the story of Iron Man was really the story of Robert’s career.” [via CinemaBlend]

In the years since, Downey Jr. has largely been credited with being the anchor of the Marvel Cinematic Universe, which has since grown into the most successful movie franchise of last time. Just a few weeks ago, when I interviewed Don Cheadle — who portrays Stark’s best friend James “War Machine” Rhodes in the MCU — I asked him if there was a specific moment when he realized that the MCU would be something *different*. And while Cheadle admitted no one could’ve seen this sort of success coming, he did name check one actor and one actor alone: Robert Downey Jr.

“I don’t think anyone really knew [what the MCU would become], you know? In the beginning, it was just something that… we knew there was a book to go to, as far as the material. And it’s always a gamble. You can spend a lot of money on these [movies], and do big ad campaigns, and sometimes people are like, “Yeah, I’m not feeling it”, so I don’t think anyone could’ve anticipated — of course, no one could’ve anticipated what happened ultimately with Endgame and Civil War and the amount of money that it made, and the impact it had. But they believed in the characters, and they believed in Robert Downey Jr. being the one who anchored this whole thing.”

As The Beatles once promised, we get by with a little help from our friends, and that — along with undeniable talent and charisma — is what it took for Downey Jr. to get back to the top. These days, he’s not only one of the highest-paid actors on the planet, but he put forth one of the defining cinema characters of the last decade. That is how you change your legacy.