Uh Oh, David Harbour Now Says He’s Not Sure Chief Hopper Is Coming Back: ‘Now I’m Not So Confident’ 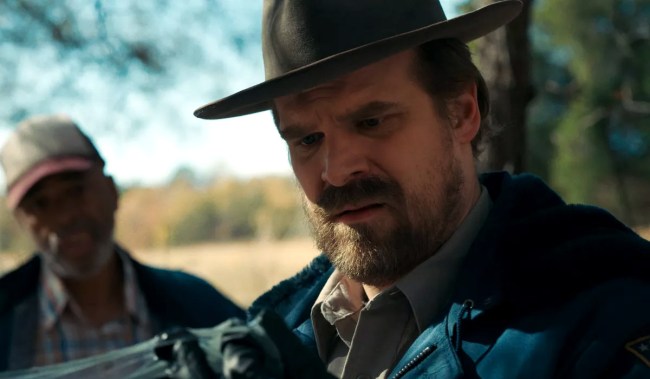 After strongly hinting that Chief Hopper is the mysterious “American” referred to at the end of Stranger Things season three, David Harbour is now backtracking and says he’s not so sure that the fan favorite isn’t actually *GULP* dead.

“I mean, we should always hold onto hope. We should never let go of hope – but Barb is really dead,” Harbour said to Entertainment Tonight last July.

Finn Wolfhard, Mike Wheeler on Stranger Things, echoed that belief at the time, saying, “I feel like he’ll be coming back. I don’t think he’s gone forever.”

Millie Bobby Brown, who plays Eleven, when discussing her character reading the heartbreaking from Hopper after his death, said, “…the way I reacted was pure devastation and sadness, and a distraught child that just lost her father or so she thinks.” [Emphasis mine.]

The message Murray Bauman left at the phone number he mentioned in Stranger Things 3 also hinted that the Hawkins Police Chief may not be gone forever.

Now, however, we’re not so sure… and neither is Harbour.

Speaking to The Wrap, Harbour reiterated that his initial feeling was that Jim Hopper is the mysterious “American” the Duffer Brothers hinted about in the season three finale.

“So [The Duffers] told me the arc of the season, and then I think we got Episode 8 like a couple months before we shot it,” Harbour told The Wrap. “And I remember reading that episode, and they hadn’t told me this whole thing about this Russian facility at the end and how that was gonna be the sort of teaser and like ‘The American’ and the Demogorgon. They hadn’t told me about any of that, actually, and I just read it in the script and I thought it was amazing.

“And I really thought I was ‘The American,’ and then I haven’t heard a lot from them (laughs),” Harbour continued. “So I really don’t know if I am. But I thought I was, but it was never discussed.”

“I didn’t ask [The Duffers], ’cause I felt confident I was — and now I’m not so confident,” he added. “I’ll tell you this, I don’t have work lined up right now. I am working on a book, so I’m sort of focused on that right now and I don’t really have acting worked lined up. So theoretically, if somebody called me, I could probably get on a plane and do something.”

On the plus side, Harbour, a SAG Award nominee this year for his role on Stranger Things, says he really hopes Hopper isn’t dead.

“My hope is the same as yours,” said the Black Widow star. “My hope is that there is some sort of resurrection [for Hopper], but I don’t know. I know they haven’t gone into production yet.”

Fingers crossed he gets a call. (And wins another SAG Award.)