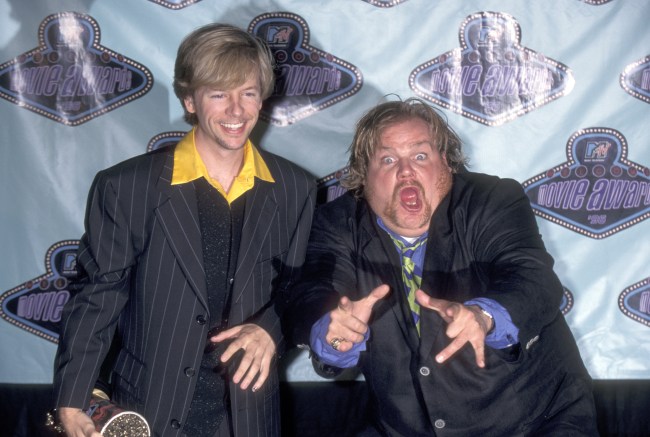 It’s been 25 years since the release of Tommy Boy, an iconic Lorne Michaels-produced comedy intended to capture the real life dynamic of best friends Chris Farley and David Spade.

Spade held Farley in such high esteem that he couldn’t even attend Farley’s funeral in 1997 because he couldn’t bear to see his friend laying lifeless in a box.

That’s not to say that the pair didn’t have their fair share of blowouts. One of the more famous confrontations came on the set of Tommy Boy, and Spade recently unpacked the physical confrontation on Rob Lowe’s podcast, Literally!

The conversation began with Lowe discussing how he went to dinner with Spade and Farley one night during the shoot, and Chris Farley ate “two bone-in steaks, and on top of each bite, he put a full-square of butter on every single bite” because each bite needed “a hat.”

The altercation between Spade and Farley was actually about Rob Lowe, who played the supporting role of Tommy’s stepbrother and is uncredited due to his contractual obligation to Stephen King’s The Stand. Lowe took the part simply as a favor for Farley.

Farley and Spade were attached at the hip, flying from SNL (where they shared an office) to the set of Tommy Boy in Toronto together on a private jet. The stress was so intense that Spade claims he was losing weight while Farley was packing on the pounds; “we were all burned out. We were both fu*king dying. It’s like an old married couple; we’re fu*king fighting all the time. We were never apart.”

That set the stage for the shitshow that would then ensue.

One night, after leaving NYC for Toronto, they arrived around 1 a.m. for a 6 a.m. shoot. Farley said to Spade, “I”m feeling sick. I think I have the flu or something. I’m going to go and crash.” Meanwhile, Spade stayed up a little longer and called Rob Lowe, and they had one drink at the hotel bar. “We don’t tell Farley. Because of course we don’t. We see him every godf*cking day,” Spade said.

The next day, Spade went to his room, and Farley was already gone. When Spade got to set, however, Farley started staring at him, “biting his lip, which meant they we’re about to have a fight. That was his tell.”

Somehow, Farley had heard that Spade and Rob Lowe were hanging out the night before, and he got angry that he wasn’t invited. “How’s Rob Lowe?” Farley asked again. “How’s your precious f*cking Rob Lowe?”

“I don’t know,” Spade said to him.
“How was drinks last night,” Farley countered.
“Oh, is that what we’re getting at?” Spade asked. “It was fine. It was all right.”
“So, you call f*cking Rob Lowe, so you can have a little date with him, but you don’t call me?” Farley asked.
“The last word off the wire was that you were sick,” Spade said.
“So you called Rob Lowe?”

This went on for a while, and when the returned to set, Farley was still furious with Spade, glaring at him while smoking. At some point, Spade was outside, freezing, and sitting on the ground eating a tuna fish sandwich. Farley was standing over him, smoking a cigarette. “How’s Rob Lowe?” Farley repeated.

When Spade didn’t take the bait — “he can’t stand that it’s not going anywhere” — Farley came over, and stood on Spade’s hand, on his tuna sandwich “with his big f*cking boots, with all his thousands of pounds.” Then Spade threw a Diet Coke on Farley, and Farley in turn pushed Spade down a small set of stairs. When Spade got to the bottom, “I stand up and say, ‘Are we in a fight?’ And the [director says on the walkie-talkie], ‘Action!’ and [Farley and I] just stare at each other, and we turn and we walk in.”

Spade then insisted that the production crew shut down the set for days because he refused to talk to this “asshole.” Farley then went on to tackle a crew member of his size out of sheer anger; “He was so mad, he just went up and tackled him.”

The two ultimately put away their differences to create one of the most quotable comedies of all-time.