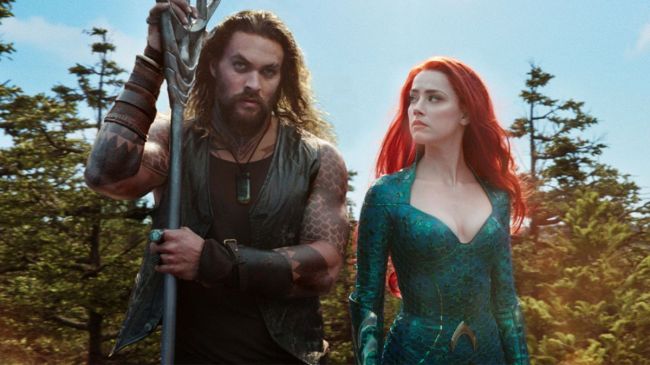 Walter Hamada, the President of DC Films at Warner Bros., testified during the ongoing defamation lawsuit between Johnny Depp and Amber Heard this week and confirmed that the studio considered replacing Heard in the upcoming Aquaman sequel.

Heard, 36-years-old, started in the first Aquaman film as Mera back in 2018. She also appeared as the character in both Justice League and Zack Snyder’s Justice League. Hamada says part of the issue with Heard was the chemistry that she had with star Jason Momoa in the original film.

During her testimony last week, Heard claimed that she’s not sure if she’s in Aquaman and the Lost Kingdom at all, as she believes the studio cut “a bunch” of her scenes.

The president of DC Films testified Tuesday that the studio considered replacing Amber Heard for Aquaman 2 out of concern that she lacked chemistry with star Jason Momoa. However, he said the studio did delay picking up its option for several weeks as it considered whether to recast the role of Mera, who was Aquaman’s love interest in the first film.

“They didn’t have a lot of chemistry together,” Hamada said. “Editorially they were able to make that relationship work in the first movie, but there was a concern that it took a lot of effort to get there… You know it when you see it, and the chemistry wasn’t there.”

Hamada said that the chemistry was created in post-production, using “movie magic,” including the film’s score. He said it is not uncommon for two leads to lack chemistry. [via Variety]

The reveal about Warner Bros’ decision-making comes as a petition on Change.org calling for Heard to be removed from the film recently crossed four million signatures.

In addition to Heard, Aquaman and the Lost King — the sequel to 2018’s billion-dollar-grossing Aquaman — stars Jason Momoa as the titular King of Atlantis, Willem Dafoe, Patrick Wilson, Dolph Lundgren, Yahya Abdul-Mateen II, Nicole Kidman, and Temuera Morrison. At this time, the James Wan-directed film is scheduled to hit theaters in the United States on March 17, 2023.