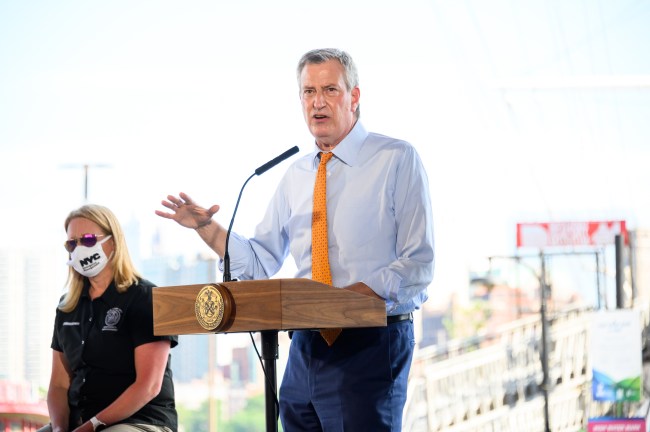 Big Bird gonna Big Bird. Bill de Blasio (born Warren Wilhelm Jr., which is a name so far away from “Bill de Blasio” that you’d be fine to call them opposites) has decided that furloughing himself is a great way to chip away at the $9 BILLION revenue gap:

Gothamist– Nearly 500 mayoral staffers, including Bill de Blasio himself, will be placed on a weeklong furlough in the coming months, as the city attempts to chip away at a $9 billion revenue gap sparked by the pandemic.

The new measure will require all Mayor’s Office staff to take five unpaid vacation days between October and March of next year. The policy is expected to save “in the neighborhood” of $1 million, according to the mayor.

Hey, gotta start somewhere. A million here, a million there… pretty soon you’re only $8,898,000,000 away from breaking even. And if you think it was easy to figure out how the hell to subtract $2 million from $9 billion, you’re high on crystal.

“Morale is bad,” said one City Hall staffer. “My morale is defunded.”

Lolz. Can’t make this stuff up. My morale has been asking for spare change for a cup of hot soup since March. Join the queue, pal.

Can you imagine working in a government office right now? ANYWHERE? Everyone hates you. And they don’t just hate the elected officials but anyone associated with them, including the fresh-faced, idealistic kids who bring them coffee and try to suggest speech improvements here and there. As soon as you tell people you work for Senator so-and-so or congresswoman blahbitty blah, everyone hates everything you do. They hate you, your dreams, your efforts, and everything you used to believe in when you majored in poli-sci and added recycling bins at four new locations on campus. Sorry kid, you wanted this life.

Once upon a time, I knew a young lady who worked on capitol hill as a page (yes, that’s a real job, still to this day, and you don’t need to know how to saddle your sire’s horse to get it.) She would paint pictures of all the beautiful, smart, engaged young people who worked on the hill and met for happy hour and loved the pace and sense of working towards a better country.

I have no idea what happened to her. Maybe she ended up working for de Blasio. Maybe she’s staring down five unpaid vacation days over the next year. And maybe she still believes that that will contribute something, that she’s doing her part through that sacrifice, helping to scrape away at the $9 billion revenue gap.

But I highly doubt it.