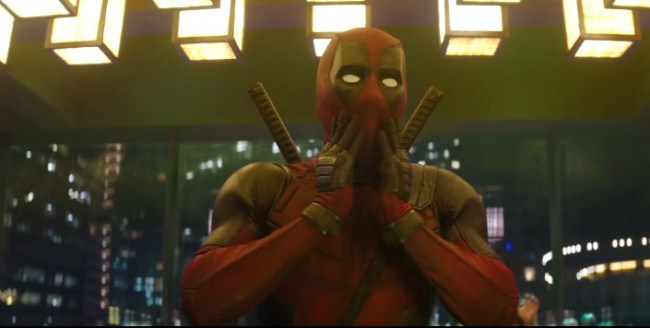 The final Deadpool 2 trailer is here and it reveals the most footage we’ve seen so far, a little better idea of what the plot will be, and manages to both reference Avengers: Infinity War and insult the DC Movie Universe as only Deadpool can.

And when I say a lot more footage, I’m not kidding. Before this we hadn’t seen much, but in the final Deadpool 2 trailer we actually get to see Deadpool’s “super duper f*cking group” of X-Force characters like Domino, Bedlam, Shatterstar, and, oh yeah, Peter.

Deadpool also manages to sneak a Thanos reference (since Josh Brolin also plays him in addition to Cable and Reynolds loves trolling him), throws a dig DC’s way, and slashes and thrashes his way towards trying to save a mysterious kid named Russell.

We still have no idea what role Bill Skarsgård (Pennywise from IT) will play, but he’s listed rather high up on the cast list on IMDb.

Synopsis (not really): After surviving a near fatal bovine attack, a disfigured cafeteria chef (Wade Wilson) struggles to fulfill his dream of becoming Mayberry’s hottest bartender while also learning to cope with his lost sense of taste. Searching to regain his spice for life, as well as a flux capacitor, Wade must battle ninjas, the yakuza, and a pack of sexually aggressive canines, as he journeys around the world to discover the importance of family, friendship, and flavor – finding a new taste for adventure and earning the coveted coffee mug title of World’s Best Lover.