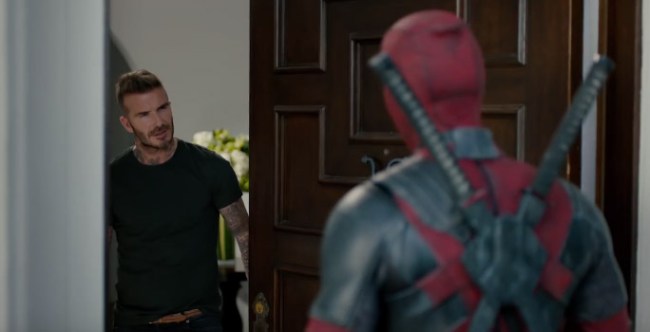 Remember in the first Deadpool movie when Wade was sitting on the couch with Blind Al and she said to him, “Looks aren’t everything,” as he was whining about not being with Vanessa anymore?

And he replied, “Looks ARE everything! You ever heard David Beckham speak? It’s like he mouth-sexed a can of helium.”

Well, now with Deadpool 2 about to hit theaters, Wade wants to make sure that there are no hard feelings between him and Beckham so he paid a little visit to the soccer legend at home to try and make peace.

(Though, in fairness, he did follow up his burn on Beckham with, “You think Ryan Reynolds got this far on a superior acting method?” So he took as well as he gave.)

Here’s the scene in question…

And now we have Wade/Ryan trying his best to get David Beckham to accept his apology, first with texts then with visits to his doorstep bearing presents.

Though he couldn’t help himself and at one point threw in another little zinger. Which Beckham gets some nice payback with references to some of Reynolds worst films like Green Lantern, R.I.P.D., Selfless, Blade: Trinity, and uh, Boltneck. That last one really set Deadpool off. Little wonder…

Ahh Halloween. And now to watch one of my favorite @VancityReynolds flicks. Boltneck! pic.twitter.com/9lUVz3KhNG

Easily the best marketing campaign of all time. Deadpool owns the month of May like a bitch. 🙂

Deadpool 2 hits theaters on May 18.