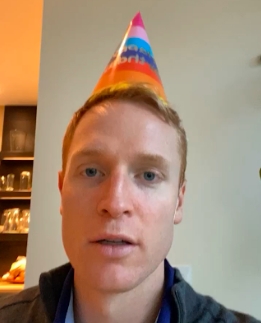 Today’s my 31st birthday. What a mercifully insignificant number. I’ve never cared less about a birthday. I had jam this morning to celebrate. Jam! It’s been oatmeal with chia seeds, raisins, and the daintiest dash of agave for two weeks so I decided to let my freak flag fly today with a dollop of mom’s homemade raspberry jam—a decent stand-in for bottle service sparklers.

The Daily Beast writer said I had “slut-shamed a murdered girl.” I’ve never slut-shamed anyone in my life. I love sluts. I was a slut for a whole summer once. Burned a lot of bridges. Burned when I peed. I mentioned that at a show once and some woman yelled out “slut is the N-word for women.” Uhm, no. Not even close. First, guys can be sluts too. I hear gay guys call each other sluts all the time, sometimes as a compliment. And second, the word slut didn’t evolve as an epithet from hundreds of years of social disenfranchisement, police brutality, wage gaps, disproportionate incarceration rates, etc. I wish I had said all this to that heckler at the time. But I think I just told her to shut the fuck up.

Things were looking up for a while there. I love my new job, our podcast is growing and making real money, I had more momentum in standup than ever before, and we were just a few weeks away from the reopening of my golf club. All that on top of a fantastic girlfriend with the rare capacity to handle my volatility. I had a fun idea for a birthday party: a wine and weed dinner at my place. Everyone brings a bottle of wine or an eighth of weed, and we’d play games like Secret Hitler and Codenames late until the night, or until someone jokingly pitched group sex, making everyone uncomfortable enough to leave.

I do have a nice bottle of wine. Get this—two weeks ago, we went into a wine store and I bought a $120 cabernet, joking that if the world was going to end, I wanted it to at least taste good. The economy wasn’t on fire at that point. But I still can’t taste the difference between $20 and $120.

I’m going to head out now to do 31 chops of wood or kettlebell swings to somehow acknowledge that I was born on this day. Just a light little woods workout to rustle up those taste buds before I bring the big red home.

Apologies for the dreary tone. It’s my party and I’ll cry if I want to.