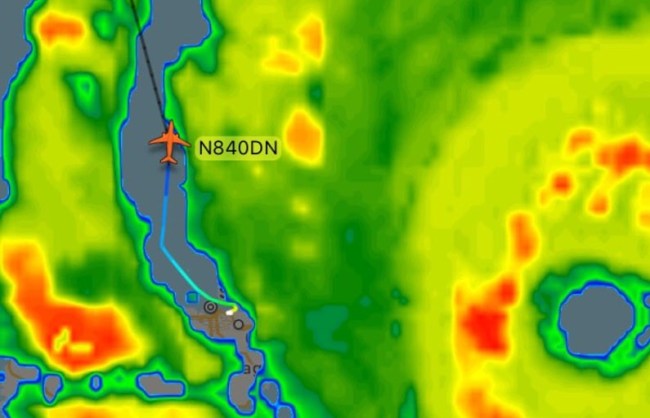 Catastrophic Hurricane Irma is currently in the Caribbean and leveling any island in its path. Gaston Browne, the Prime Minister of the small island of Barbuda, said around 90% of the nation’s structures and vehicles have been destroyed. He added that the Category 5 hurricane left the island “barely habitable.” Irma also brought destruction to St. Martin where top local official Daniel Gibbs said the island was “95 percent destroyed” and “an enormous catastrophe.” The intense and frightening hurricane was unleashing its wrath near Puerto Rico on Wednesday and one Delta Air Lines plane dared to venture towards the massive storm and barely escaped Irma’s powerful 185 mph winds.

Right ahead of Hurricane Irma making damaging landfall in Puerto Rico, a Delta Air Lines plane flew from New York to San Juan, picked up passengers, and managed to flee the 400-mile-wide storm. While every other plane had diverted their destinations away from the belly of the beast that is Hurricane Irma, Delta flight DL431 flew towards it. It didn’t help that the flight’s takeoff was delayed by 34 minutes from John F. Kennedy airport in New York. Jason Rabinowitz, an aviation industry writer and researcher, tracked the flight and shared this incredible rescue mission on Twitter.

You really want to fly into SJU during a category 5 hurricane, DL431?

Everyone else has turned around. pic.twitter.com/nHdChvYh2Y

Getting into San Juan wouldn’t necessarily be a problem since winds were not yet dangerous, but if Delta was not able to load passengers and luggage in a speedy manner, the plane would be grounded on an island about to be hit by Hurricane Irma. That would have meant leaving this relatively brand new 737 airplane worth $99 million exposed to the elements of the scary hurricane. Delta bumped up their departure 25 minutes and started boarding an estimated 30 passengers.

Delta is hoping for a VERY quick turn once they get to SJU.

The return flight is listed as "early," departure bumped up 25 minutes pic.twitter.com/0F6rrn2HR7

With perfect timing, the jetliner took off during a slight gap between the hurricane’s outer rain band and the center of the storm.

Well, that's the end of that story. DL302 is reaching the edge of #Irma's outer bands.

Despite the delay from JFK, the flight out of Puerto Rico departed at 12:41 pm, 24 minutes ahead of its scheduled takeoff. Delta was able to touchdown in San Juan, taxi to the gate, unload luggage and passengers, clean the plane, load new luggage, board new passengers, taxi to the runway, and take off in an astounding 52 minutes. Why can’t airlines do this every time?

If you’re on the edge of your seat you can relax because Delta flight DL302 safely landed back in New York at 4:15 pm, 46 minutes ahead of schedule. Amazing.