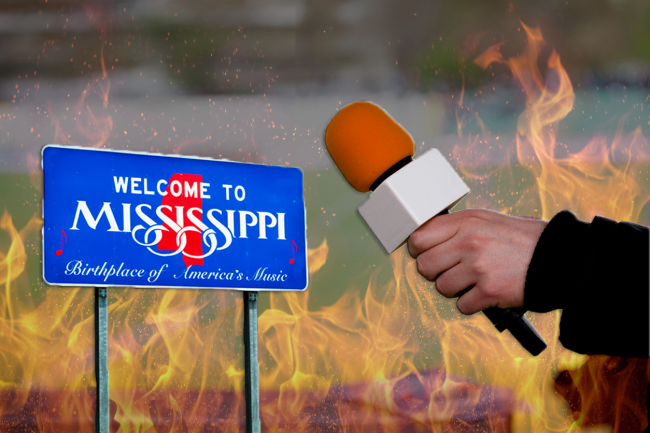 On the surface, it may not seem like there is anything wrong with a quote from Class of 2023 quarterback prospect Devin Brown that was published by Yancy Porter on the Ole Miss 247 Sports website. The quote fit the bill for something that a recruit would say after a visit.

In the quote, Brown thanked the host school and said that he was impressed but not committing yet. All pretty standard.

However, there was one major problem with the quote. Brown is saying that Porter made the entire thing up.

I gave my number to a reporter today and he quoted me when I have yet to even speak with him. Not cool @YancyPorter. Ole Miss recruits check your quotes. 🤬 pic.twitter.com/KLOKYs4eVU

Porter, who has been a recruiting analyst for nearly a decade, has a reputation in Oxford, Mississippi for being unsavory, to put it lightly. He consistently spells things wrong and misses on his scoops more frequently than he should.

Now there is a bigger concern: Is he just making things up as he goes?

Most recruits are not paying for a private message board like the paywall that Porter often posts behind. Thus, those recruits rarely read the articles that are written about them.

Brown did and he advised others to do the same.

To make things even more embarrassing for Porter, he spelled the term “tailor made,” as “taylor made.” Unfortunately, that’s pretty on-brand.

In a since-deleted tweet, Brown also shared his direct message history in which he called Porter out.

Porter said that the tweet was “making him look very bad,” which is absolutely true— unlike the quote he attributed to Brown.

Addendum, when you get caught lying, “Please take this down because it’s making me look bad” is not a very good apology. pic.twitter.com/6hKsKO66b2

Porter has since modified the quote on the Ole Miss site, and offered both an apology and an explanation. He claims that he spoke with a third-party stringer who gave him the quote from Brown.

As a recruiting analyst, Porter should not need a stringer. That just means he didn’t want to work on a Gameday while Brown was in town.

And to make things worse, Brown said that he didn’t talk to the stringer either. Hm.

which Devin said he didn't talk to. I should have never made the indication in the report that it came directly from Devin. I sincerely apologize for this error in judgement to the Ole Miss community, 247Sports and most importantly to Devin Brown himself and his family.

In response, the site owner, Chuck Rounsaville, offered his thoughts. They are extremely defensive and (as someone familiar with Yancy, the program and the site) rather delusional.

Porter, per conversations with multiple recruits and people inside the program, is mostly viewed as a nuisance. Rounsaville, who can be considered a prominent voice of Ole Miss’ “good ole boys” group, somehow disagrees.

Just look at this attempt to save face:

In journalism, there are quite a few rules to follow. But NONE are more important and easy to follow than Rule #1— don’t make up quotes, cite your sources, and don’t… well… DON’T F**KING LIE!

PRO TIP: Making up quotes as a professional *has* to be a firing offense. One and done.

In a decision beyond all comprehension, Porter has neither been fired, nor removed from the site in any capacity. It’s mind-boggling.

He made up a quote from a recruit, spelled the quote wrong, and kept his job. Wild.

Fortunately, Brown remained in good spirits. He, like any recruit reading this, should understand that Porter does not reflect upon the Ole Miss program.

He has nothing to do with a recruit’s decision and he is not a regular part of every day life in Oxford. Brown also wanted to make that clear.

For the record, everyone that actually represents the Ole Miss football program was first class this entire weekend. I had a great weekend. This is a reflection of this reporter, not the university or it’s program. I want that to be clear. Thank you @RebelsFBRec for having me!

Ole Miss head coach Lane Kiffin and offensive coordinator Jeff Lebby are heavily recruiting Brown, who is listed as the No. 8 quarterback recruit in the nation. He is currently committed to Southern California, but the Rebels want to flip him come signing day and it’s not hard to see why:

Brown has a cannon and he would be a welcomed addition to a high-powered, fast-moving Rebel offense. Just so long as Porter keeps his distance.