Rest In Peace To Diana Rigg, Who Delivered Some Of ‘Game of Thrones’ Most Ruthless Lines 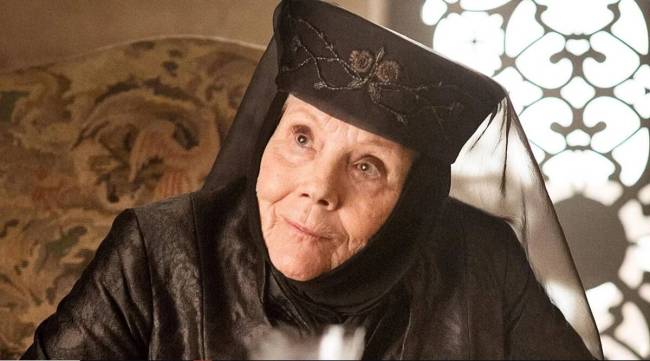 When you think about what Game of Thrones was at its peak — a cerebral and regularly brutal examination on power dynamics in a barbarian and magical world — it’s remarkable that one of the series’ oldest characters was also considered to be one of its most badass. And that character was Olenna Tyrell, played by Dame Diana Rigg.

The matriarch of the powerful House Tyrell, Olenna wielded the sort of venomous tongue that only decades of power and respect could buy. Her propensity for absolutely roasting people become so well-known and widely-beloved that there are now YouTube compilations of said roastings, with one even counting up 43 separate instances of her savagery.

Of those routinely legendary dismantlings, her last was also arguably her greatest, when she verbally undressed Jamie Lannister and shoved a knife into his sister and lover’s heart all with one final devastating soliloquy.

After ruthlessly and secretly murdering the monstrous King Joffrey at his own damn wedding in front of his own damn family, Olenna Tyrell wanted to make sure that her secret didn’t die with her and that the pain of its existence would infect her enemies, the Lannisters, with rage they’d never be able to turn into revenge.

In a series known for its extraordinary violence and expertly crafted storylines, one of its most memorable (and meme-able) moments came from a little but mighty old woman swigging a chalice of poison and letting her enemies know the truth: “Tell Cersei. I want her to know it was me.”

So, Rest in Peace to Diana Rigg, who remained a force of nature even into her final years. Game of Thrones wouldn’t have been the same without you.

Rest in Peace to the legendary Diana Rigg.

One of her final iconic roles was, of course, as Olenna Tyrell in 'Game of Thrones', where she delivered one of the most ruthless lines in a series full of them.

"Tell Cersei. I want her to know it was me."pic.twitter.com/R1xw5wAIMK