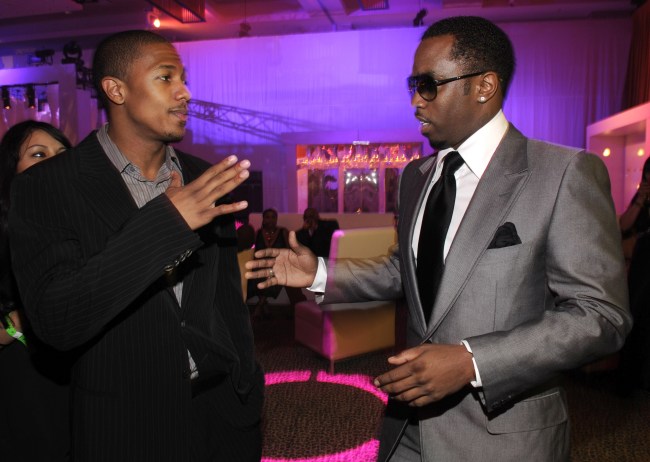 Rapper/mogul Diddy has come to the defense of Nick Cannon.

On Tuesday night, Cannon was fired from hosting his show Wild ‘N Out by Viacom for making several racially insensitive, anti-semitic remarks where he called black people the “true Hebrews” and praised the controversial Nation of Islam leader Louis Farrakhan on his Youtube show.

“ViacomCBS is ending its decades-long relationship with Nick Cannon after the actor and TV host propagated anti-Semitic conspiracy theories on his podcast.” https://t.co/Jrn6PfHzRh

On Wednesday Diddy took to Twitter to invite Cannon to come join him over at Revolt TV.

.@NickCannon come home to @REVOLTTV truly BLACK OWNED!!! ✊🏿❤️ We got your back and love you and what you have done for the culture. We are for our people first!!! For us! By US! Let's go!!!

The Diddy-owned Revolt TV was recently in the news for hosting Minister Farrakhan on the 4th of July in a speech that saw the 87-year-old Nation of Islam leader calling the head of the Anti-Defamation League, Jonathan Greenblatt, “Satan.”.

“Mr. Greenblatt, you are Satan. Those of you that say that you’re Jews, I will not even give you the honor of calling you a Jew. You are not a Jew… you are Satan and it is my job now to pull the cover off of Satan so that every Muslim when he sees Satan, pick up a stone, as we do in Mecca,” F

"Those of you that say that you’re Jews, I will not give you the honor of calling you a Jew. You’re not a Jew. You’re so-called. You’re satan. And it’s my job now to pull the cover off Satan. So every Muslim when he sees Satan, pick up a stone."

We are pleased to announce that Louis Farrakhan's anti-Semitic video on the REVOLT TV channel has been removed from YouTube for violating the platform's hate speech policy. Unfortunately, the video is live on other channels, report them here: https://t.co/Ks5QRHOCb8#FightHate pic.twitter.com/pQZ8bKiJaX

It’s currently unclear if Cannon, who is currently fighting Viacom for ownership of Wild ‘N Out, will take Diddy up on his offer.