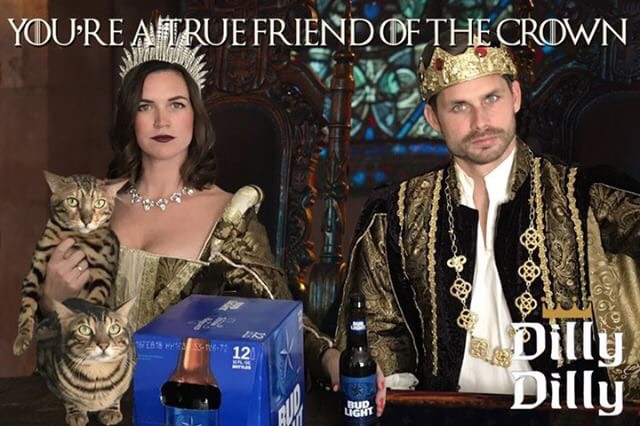 Dilly Dilly is everywhere and it’s not going away for the time being. If you’re not on the Dilly Dilly train by now, you’re missing out on the best beer commercial craze since WASSSSSUP?!. Case in point, this Dilly Dilly-themed Christmas card. It’s proof that the Dilly Dilly meme is at peak cultural greatness right now.

While we’re on the subject, the NY Times did a solid deep dive about Bud Light’s thinking on the phrase. Two important bits of information: Bud Light execs already consider Dilly Dilly bigger than “wassup” and the frogs and now we officially know who came up with Dilly Dilly…’

via the NY Times:

Mr. Goeler said he believed that “dilly dilly” had surpassed the popularity of “whassup” and the frogs, and he said that the success had prompted Budweiser to expand the campaign. Additional advertisements were created to introduce new characters into the “Game of Thrones”-inspired universe, including a trilogy that will culminate in a Super Bowl ad, he said.

The creative directors gave credit for the phrase to Alex Ledford, a senior copywriter, and N. J. Placentra, a senior art director. The pair were trying several nonsense phrases when one uttered “dilly dilly,” and it made them laugh.

They claim to have destroyed records of the other phrases they tried, though Mr. Henderson was skeptical.

“They have a list that they either will not share or they have actually lost,” he said.

Reminder: We would be thrilled to take all your Dilly Dilly-related content over on the BroBible Instagram…