D.K. Metcalf Might Be The Worst Softball Player Ever, Struck Out Badly Against Quavo In Celebrity All-Star Game 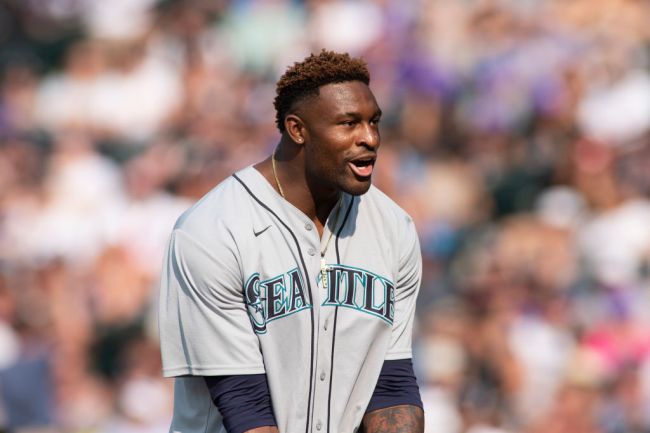 DeKaylin Zacharius Metcalf is one of the most freakish athletes in professional sports. The 6-foot-4, 230-pound Seahawks receiver continues to dominate cornerbacks in the NFL, puts on a show during his workouts, consistently throws down dunk contest level dunks, and held his own against some of the best track athletes in the world.

If you’re wondering how Metcalf would do with a bat in his hands…the mighty DK has struck out. pic.twitter.com/GxHlyx57OL

Ahead of Tuesday’s MLB All-Star Game, the celebrity softball game was held on Monday night after the Home Run Derby. Metcalf had clearly been watching his major league counterparts and decided to swing for the fences.

It did not go well.

Batting leadoff, Metcalf stepped into the box donning a Mariners jersey and squared up to the mound. Quavo, 1/3rd of Migos, was pitching and lobbed in the first pitch.

It was a three-pitch at-bat and it was very, very bad. He didn’t even come close to making contact— not even a foul tip.

Catch the rest of All-Star Celebrity Softball on @espn. pic.twitter.com/E3u5QQN2hu

What happened next only added salt to Metcalf’s wound. Before I dive into what played out, here is my alternate headline to give you a taste:

Quavo strikes out D.K. Metcalf on three pitches before allowing a double to JoJo Siwa

Do you get the picture?

As Metcalf returned to the bench, YouTube personality JoJo Siwa walked up to the plate and the two exchanged a high-five. What a world.

I won’t pretend to know anything about Siwa, except for that she is tremendously successful and her high-energy persona often stresses me out. With that being said, after last night, I have a new-found respect.

She stepped up to the dish with serious swagger that I would have never expected. The thirst trap TikTok from the MLB is extremely aggressive, but the swagger point stands.

And then, following a strikeout from one of the greatest physical athletes of this era, she effortlessly knocked a double to left field. On the first pitch.

.@QuavoStuntin struck out @dkm14 in the Celebrity Softball Game, but gave up a double to @itsjojosiwa in the next at-bat 😳👏 pic.twitter.com/oBGF3XZ7Ts

It was a tough look for Metcalf, but Siwa made some great contact. Credit where credit is due!

As if the evening couldn’t get any worse for the the NFL’s 1,000-yard receiver, it did. He got back up in the later innings and faced former Colorado Rockies third baseman Vinny Castilla.

He struck out again.

how dk metcalf manage to look this unathletic pic.twitter.com/Y99gN0Hmcy

All of the haters that say baseball is the least skilled sport have officially been silenced. Metcalf, one of the best all-around athletes in the world. looked like a fish out of water. Yikes.