D.K. Metcalf’s Quest To Run The 100-Meter Dash In The Olympics Begins On Sunday With USATF’s Golden Games 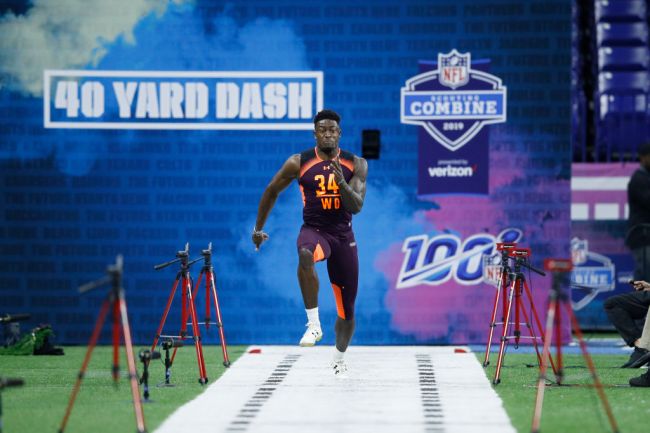 DeKaylin Zecharius “DK” Metcalf is ridiculously fast for someone who is 6-foot-4, 230 pounds, but we’re about to find out just how fast. Better known as D.K., the Seahawks’ third-year receiver is set to take his first shot at qualifying for the Olympics by running the 100-meter dash at Sunday’s USATF Golden Games and Distance Open at Mt. San Antonio College in Walnut, California.

The discussion began last fall when Seattle quarterback Russell Wilson threw and interception to Arizona’s Budda Baker. It looked like the Cardinals corner was destined for a pick-six until Metcalf came out of NOWHERE to chase him down and ruin his bid. The ridiculously athletic play sent social media ablaze and had Kliff Kingsbury in awe, calling him a “huge stallion of a human.” Baker’s hilarious reaction to getting caught was caught on mic and he could not believe it.

DK Metcalf is not normal.😦 pic.twitter.com/nGkwHLUGUz

As people began to wonder whether Metcalf was fast enough to compete in track and field on the biggest stage, USA Track and Field sent a playful tweet encouraging him to test his speed against “real speed.” Well, Metcalf took the tongue-in-cheek jab to heart.

Days later, his agent called USATF’s Managing Director of events and Entertainment Properties/Broadcasting Adam Schmenk to let him know that Metcalf was all-in on training for the 100-meter event.

“DK’s agent told us that he really wants to try to make the Olympics and asked what steps he needs to take,” Schmenk said to Yahoo Sports. “We walked him through what the auto qualifying time was that he would have to run in a sanctioned USATF event and told him that we would help him find a lane if and when he wanted to do this.”

Here is what needs to happen:

On Metcalf’s insane chase down tackle, he covered 114.8 total yards and reached a top speed of 22.64 miles per hour.

If he were to run at that speed for the entire 100-meter dash, it would take him 9.88 seconds and he would qualify. That is nearly impossible with a block start from zero miles per hour, however, he is no stranger to a block start and will be running without a helmet and pads.

Metcalf ran track in high school and stood out amongst his teammates.

He specialized in the hurdles and triple jump at Oxford high school, and while he didn’t run the 100-meter, he typically ran low-10 splits on his leg of the 4×100-meter relay team. Metcalf often blew by opponents coming around the curve and helped lead his school to four consecutive state titles. In his final track and field event in 2016 (he did not run for Ole Miss), he and his relay team broke a state record that they still hold.

Although he hasn’t run competitively in five years, the big fella can MOVE, and has been training exclusively for the event since Seattle’s season ended on Jan. 12. Metcalf’s first meet on the professional level airs live on NBC at 4:30 p.m. ET on Sunday.