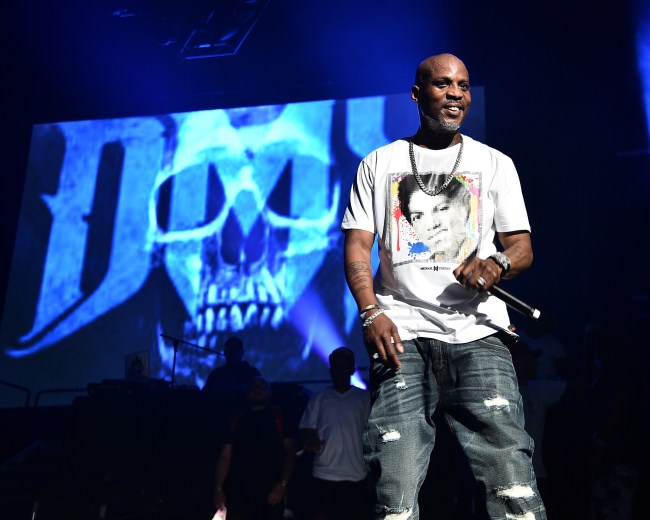 DMX passed away two weeks at the age of 50 and now his life is being honored in a way that he would have probably liked.

On Saturday, DMX’s casket was put on the back of a monster truck as hundreds of bikers led the funeral procession from his birth place of Yonkers to the Brooklyn’s Barclays Center where he was going to be memorialized.

Hip-hop legend DMX stopped traffic one last time Saturday — with a high octane funeral procession that growled from Yonkers to Brooklyn’s Barclay’s Center, where thousands are turning out for the rapper’s 4 p.m. memorial service.

The procession began at around noon in Yonkers — where the rapper, whose real name is Earl Simmons, grew up. It was led by hundreds of motorcycles, and the rapper’s shiny red coffin was borne on the flatbed of a souped-up monster truck, with “Long Live DMX” emblazoned on the sides of the vehicle.

Here are the awesome videos/pictures of DMX’s funeral procession on Saturday.

DMX’s casket riding around on the back of a monster truck during funeral process #RIPDMX pic.twitter.com/G4cIoyqGrQ

memorial ride and tribute to DMX on Atlantic Ave. today. I've never seen so many bikes, ATVs and tricked out rides in the city like this before. they just keep coming! one rider told me he came from The Bronx, and many have come from much farther pic.twitter.com/w2F87mZc3A

There are literally thousands of people, bikes & exotic cars here for DMX—this video doesn’t even show half.
They’re ready to ride from Yonkers, DMX’s hometown, to the Barclay’s Center in Brooklyn where the rapper, who died a few weeks ago, will have his memorial today@News12WC pic.twitter.com/1ufkri9chY

Looking out the window of my apartment and see no other than DMX going out in style. That’s his coffin coming down Flatbush on the back of a damn monster truck. Ruff Ryder even til the end. #RuffRiderz #DMX #RIPDMX pic.twitter.com/GcX7S24Sb1

#DMX Funeral procession as they walk away towards the BQA backyard towards #RIPDMX pic.twitter.com/dRwBqU5ze5

DMX memorial at Barclays: thousands of bikes and his casket in a monster truck. Incredible. pic.twitter.com/VDeeYS76M5