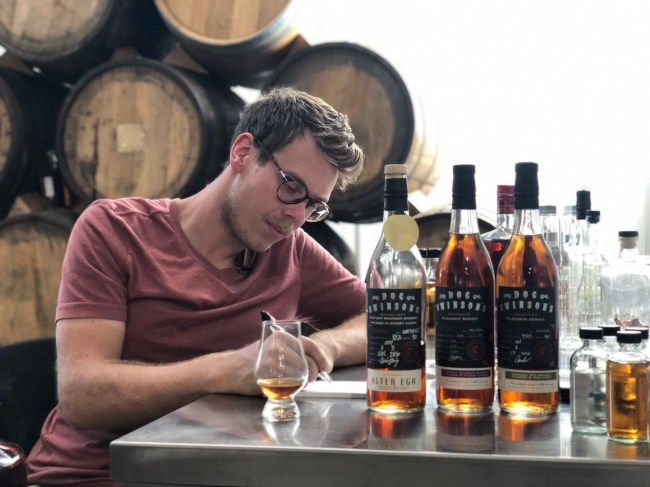 The New York International Spirits Competition was the first in a series of now global beverage competitions. So, there’s a certain level of prestige associated with winning. And I’ll be honest, I was expecting the winners to have some white in their hair, or at least some greying. I certainly wasn’t expecting a young 21-year old.

But that’s how old Jesse Parker was, just 21 when he won the prize for best gin. That’s quite the feat for someone who had just turned the legal drinking age.

With just 9 years of experience, Jesse is now a Master Blender as well as one of the founders of Doc Swinson’s. From brewing beers as a 6-year old with his mom to jumping on board with a complete farm to bottle producer as a 21-year old, Jesse’s story is one that he credits to being in the right place at the right time with a little bit of luck sprinkled on top.

But when you look past the charming smile and humble remarks, Jesse is a guy with a deep passion and drive for making spirits. He’s always loved the process of flavors and their underappreciated connection to memories. With a background in blending brandies and an expansive knowledge of different flavor profiles, there’s no one more qualified to bring forth new, interesting, and unique flavors to the American whiskey industry.

Joining Arthur Kade on the Endless Hustle podcast, here’s Jesse sharing a bit about himself and his journey in winning the New York International Spirits Competition to becoming one of Doc Swinson’s founders.

While Jesse may credit his own personal success and that of Doc Swinson’s to happy accidents, it’s clearly more than just a bit of luck. Seriously, I can’t overstate how impressive winning the New York International Spirits Competition at just 21-years old is. Honestly, sit down and pour yourself a glass, Jesse. You’ve certainly earned it. But if I’ve learned anything, that’s not who Jesse is. He’s putting in the time to experiment with blends to bring you new, unique whiskeys. And for that, I salute you, Jesse.

Using those sourced ingredients, Doc Swinson’s aims to find an outcome that is better than the sum of their parts. They look to the old-world traditions that have proven themselves over the course of time. From Scottish whiskey blenders to the timeless sherry pyramids of the Spanish solera, Doc Swinson’s has done their research. And for the whiskey purists out there, they occasionally stumble upon whiskey that needs no perfecting and bottle it at cask strength.

Whatever whiskey comes through the doors is personally tasted by the four founders. If and only if it’s good, will they find a place for it in either the Alter Ego, Blender’s Cut, Exploratory Cask, or Rare Release series. At the core, they are whiskey lovers with the goal of making whiskeys even better. No need to take Jesse’s or our word for it, grab yourself a bottle!