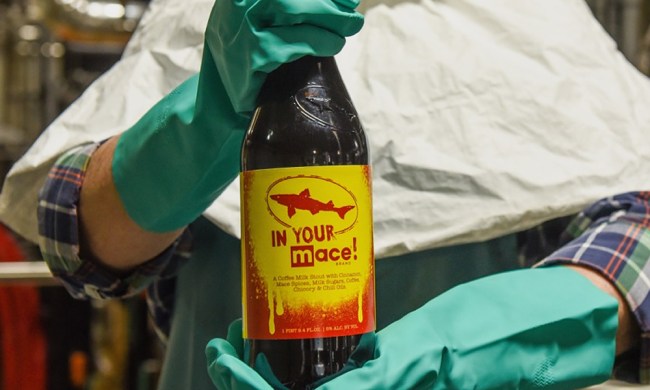 There are few things of which I’m absolutely sure. One thing I’m 99% positive about is that no one, in the history of ever, took pepper spray to the face and thought “this would make a tasty beer!”

The brains behind Dogfish Head beer most likely never took mace to the face, but there’s likely some past trauma to blame for the latest flavor to come from the Delaware brewing facility.

In Your Mace is “a coffee milk stout brewed with cinnamon verum chips from the Zanzibar Islands, mace spice, milk sugars, coffee, chicory and most importantly … chili oils, the active ingredient in Mace Brand.”

It turns out the idea did possibly come from head trauma. On a football field.

“But, mace … really? Sam dreamt up this far out beer concept with high school pal Eric Crawford, Vice President of Sales at Mace Security International, Inc. Sam and Eric became fast friends while attending Northfield Mount Hermon (NMH) High School in Gill, MA. They shared a passion for taking collaboration seriously, but themselves not so much – especially since they played varsity football together for multiple years at NMH and never won a single game.

Reminiscing ‘bout the good old days over a couple of beers while planning their trip to Boston for the city’s annual Extreme Beer Fest, Sam and Eric thought it would be great fun to brew an envelope-pushing beer together using adventurous culinary ingredients, like chicory, coffee and milk sugars, and two varieties of mace. The first being mace the spice which is the outer hull of nutmeg shell, and the other being the mighty, all-natural pepper oils found in Mace Brand pepper spray.”

High school was a crazy time.

If you’re interested in tasting In Your Mace, you’ve got three options — head down to Extreme Beer Fest in Boston, MA this weekend, head to the Milton, DE brewery Tasting Room starting Friday, Feb. 2nd or show up on Saturday, Feb. 17th.