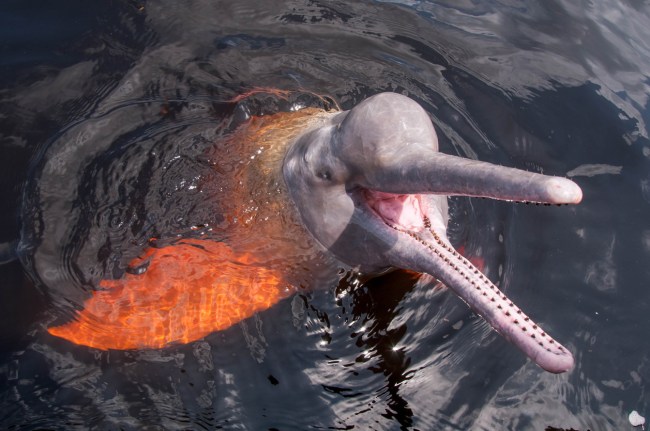 Are you ready for one of the most bizarre dolphin stories ever? River dolphins were photographed in Bolivia swimming with a massive anaconda snake in their mouths. Experts suggest that the dolphins in the rare photo were sexually stimulated by the snake attack.

Back in August 2021, researchers observed Bolivian river dolphins (Inia geoffrensis boliviensis) chomping on a Beni anaconda (Eunectes beniensis) in the Tijamuchi River. Steffen Reichle – a biologist at the Noel Kempff Mercado Museum of Natural History in Santa Cruz de la Sierra, Bolivia and one of the researchers – told the New York Times that it was a rare and “extraordinary” occurrence to see the dolphins with their heads out of the water.

Last month, researchers shared their observations in a paper titled “A case of playful interaction between Bolivian River Dolphins with a Beni Anaconda” that was published in the journal Ecology.

The research team observed the pod of at least six dolphins were swimming in a synchronized way for more than 260 feet in the Amazon rainforest waterway in northeastern Bolivia.

The dolphins jawing on the enormous snake was especially perplexing since Beni anacondas are such apex predators that researchers haven’t recorded a single incident of the giant snake being eaten – except for one case of cannibalism.

Anacondas are semiaquatic and can hold their breaths for a few minutes, but experts believe the serpent in the photo died because it was submerged at least seven minutes.

Researchers suggest that the frolicking dolphins were playing with the anaconda and not preying on the snake.

“It became clear that they rather were playing with the snake than trying to eat it,” researcher stated.

Omar Entiauspe-Neto – one of the paper’s authors and a taxonomist at Universidade Federal do Rio Grande do Sul in Brazil – believed “playing seems like a pretty good answer” for the dolphins’ behavior.

The researchers wrote, “There were juveniles on the scene as well, and it seemed that the adults were showing off the snake to them.”

The older dolphins may have given the youngsters a lesson on hunting.

The New York Times reported, “Something else from the photos was notable — the male dolphins’ erect penises. The aroused males could have been having a sexual romp with each other before the snake became entangled.”

“Afterwards, we were able to observe on the photographs that the adult males were sexually aroused while engaging in object play with the anaconda,” the researchers declared, according to Science Alert.

Diana Reiss – a marine mammal scientist and cognitive psychologist at Hunter College in New York – theorized, “It could have been sexually stimulating for them. It could have been something to rub on.” The scientist added that it is possible that the “males tried to insert their penises into the snake.”

Entiauspe-Neto aptly summed up what everyone is thinking, “There are so many questions.”

A research team knew something was up with a rare dolphin sighting and started snapping photos. Only after scrolling through the images they captured did they realize the dolphins were dangling an anaconda around as they swam. https://t.co/wLrzSYrRK6