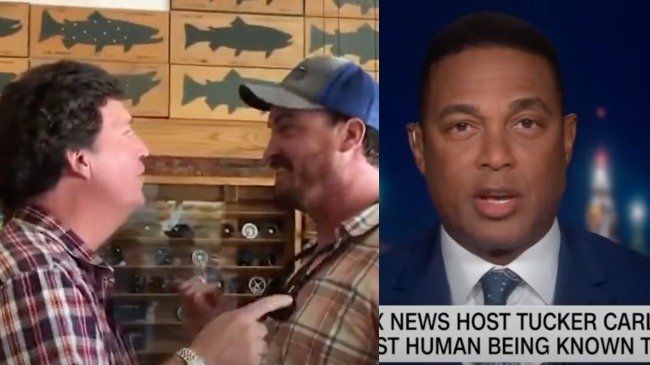 We are less than one month removed from Tucker Carlson accusing Don Lemon of having a “white supremacist QAnon cookie jar” in his “$4.3 million home in Sag Harbor, New York,” which Tucker notes is overwhelmingly white in a rant designed to paint the CNN host as diversity-averse.

The next day, Lemon claims, paparazzi were hiding in bushes on his property snapping photos.

Following Tucker’s viral confrontation with a Montana man this weekend, who called the Fox host “the worst person known to mankind” for allegedly peddling coronavirus misinformation, Don Lemon was gifted the perfect opportunity to spike the political football in support of Montana Man.

Instead, Lemon declared: “I do not like it, because I would not want it to happen to me.”

Lemon then pushed back against CNN commentator Ana Navarro’s shallow “Deal With It” stance.

“Your First Amendment right doesn’t mean invading my personal space, I’m sorry, Ana, I understand what you’re saying and I get it. I think that what Tucker says much, much of the time is completely reprehensible and divorced from reality, but he has a right to be in a space and not be accosted and not be ambushed by anyone.”

And you all gonna tell me that man in Montana confronting this jerk and telling him, he is “the worst human known to man”, was a little too harsh?

Hell. It wasn’t harsh enough. He should have told Tucker, he is the worst human known to man AND woman!

At the time of this writing, Tucker has yet to respond to the initial confrontation video that has been viewed tens of millions of times.