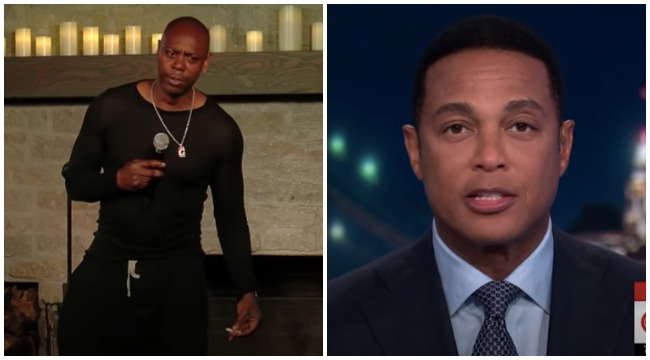 CNN’s Dom Lemon woke up today and found himself on the wrong side of a tongue lashing from the greatest comedian of our generation. Not ideal.

On Thursday night, Dave Chappelle dropped a 27-minute special on Youtube called “8:46,” referencing the amount of time Minneapolis officer Derek Chauvin kneeled on George Floyd’s windpipe in a murder that has ignited a nation.

A week after the Floyd murder, Lemon criticized the millionaires and “movie stars” who refused to come on his show, claiming they were too concerned with their “brand” before specifically urging “Black Hollywood” to “step up.”

Chappelle sarcastically referred to Lemon as a “hotbed of reality” before admitting he was screaming at the television baiting Lemon to call him out as well, as he did Oprah and Tyler Perry.

Dave Chappelle blasts Don Lemon for calling out celebrities for not speaking out on George Floyd murder “why would anyone care what their favorite comedian thinks when they saw a police officer kneel on a mans neck for 8 min and 46 seconds pic.twitter.com/Wuo2hMafVu

On CNN Friday morning, Lemon addressed the evisceration by his favorite comedian, who also took aim at less credible figures like Laura Ingraham and Candace Owens.

NEW: @donlemon responds to being called out by #DaveChappelle in powerful new Netflix special, "8:46" pic.twitter.com/URfFhHMn9D

Don handled this about as well as he could have, waving the white flag was the move. A war of words with Dave Chappelle would go over about as well as a collection of white actors releasing a self-aggrandizing video about inclusivity.

The world waits to hear from Candace Owens, the African American right-wing pundit who’s continuously undermined George Floyd for being a criminal, who Chappelle called a “rotten b****” and “the most articulate idiot I have ever seen in my f***** life.”