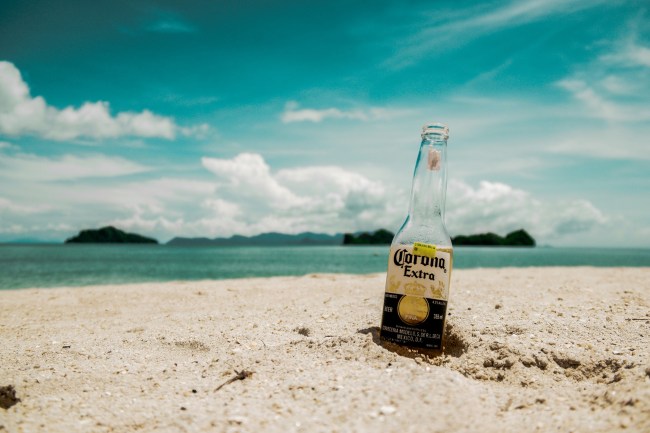 Although we may never see the day when the slogan “Make America Sober Again” is plastered all over the red hats of beer-bellied Americans on a pseudo-patriotic mission to rid the nation of boozehounds and bros, President Trump—a man who swears he has never had a sip of alcohol—is on the verge of doing just that with his latest shenanigan to protect the country from the supposed scourge of immigration.

If you haven’t heard, Trump is now threatening to shut down the U.S.-Mexico border. It’s a move that, at face value, doesn’t seem like it could throw a wrench in our daily lives. But when examining the fine print, it becomes painfully evident that closing the border would castrate the flow of beer into this country in a way that creates an almost immediate shortage.

Various reports suggest that a border freeze of this magnitude would create emergency conditions concerning popular products, including certain brands of alcohol. All we have to say is: You‘re goddamn right it would, considering that the NBA Playoffs, Cinco de Mayo, and the summer boating season are all right around the corner.

This closure would also impact the flow of goods like avocados and televisions, which are also essential elements in the pursuit of good times here in the United States. Seriously, the thought that we could soon face a time when there is no booze or guacamole to be had has all of us here at BroBible just a little nervous.

This border closing business is a big deal. Aside from a few traffic restrictions imposed during the mid-1980s and at the height of the 9/11 tragedy, the southern gates have never before in American history been completely locked up. And for good reason.

The U.S. does a shit ton of trade business with Mexico. Some of the latest data shows that roughly $1.7 billion worth of products—everything from automobiles to vegetables—are brought into the U.S. from Mexico on a daily basis. But Trump claims he will shut that shit the fuck down unless Congress makes some changes to the immigration laws that allow border agents to put a tighter squeeze on undocumented families.

It is a move that “would have a catastrophic economic impact on our country,” Senator Mitch McConnell of Kentucky told the New York Times.

And while it would take some time before this madness made it difficult for the average consumer to buy the kind of car or television they want, the booze drought would come much quicker. We take for granted just how much beer, wine, and hard liquor gets shipped in by our friends south of the border.

Not only is Mexico’s beer industry the largest producer and exporter on the global level, it is dominated by two of the largest swinging dicks of the brewing world: Heineken and Anheuser-Bush InBev.

These companies have made it a point to keep the production of popular brands like Corona and Dos Equis in their original locations. They have even used these dealings in Mexico to throw the country an economic bone by allowing other brands, like Heineken, to be made there as well.

The United States imports $4.6 billion of beer, wine, and other alcoholic beverages from Mexico each year. So, yeah, closing the border would have drastic repercussions on our buzzes. Even a slowdown would ensure that we’re all paying more for specific brands.

But Trump doesn’t give two flying squirts. He’s made it a point during his time in office to brag about never having popped the top of a cold one in his entire life. “I don’t drink beer,” Trump told reporters last year. “I’ve never had a beer. And I’m not saying good or bad, some people like it. I just choose not to do that for a lot of reasons.”

Even further, President Trump claims he’s never smoked cigarettes or dabbled in illegal drugs—not even marijuana. “Can you imagine, if I had, what a mess I’d be? Would I be the—I’d be the world’s worst,” he said.

Well, considering that our beer supply is now a pawn in your agenda, we’d say you already are, pal!