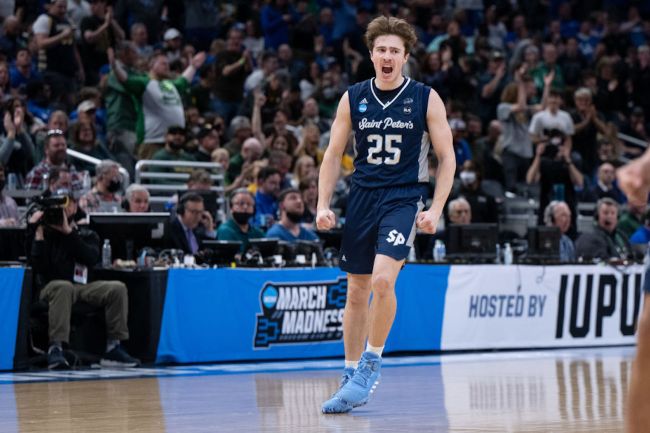 Saint Peter’s is this year’s Cinderella team as the tiny Jersey City school — who came into the NCAA Tournament as a 15 seed — has made their way to the Sweet 16 following victories over the University of Kentucky and Murray State University.

As a result of their newfound March Madness-driven fame, Saint Peter’s guard Doug Edert — who has been setting social media on fire with his mustache — has signed a NIL deal with casual dining and sports bar franchise Buffalo Wild Wings.

To announce the deal, a grinning Edert posed with an array of Buffalo Wild Wings products and the resulting photo is simply electric. Just a young man, his mustache, and his beloved chicken.

Edert isn’t the only college athlete who has parlayed their March Madness virality into a well-deserved payday, as Cassidy Cerny, a cheerleader for Indiana University landed a name, image, and likeness deal with an apparel company called Breaking T after she retrieved a ball that was stuck on the top of a scoreboard.

Located in Jersey City, New Jersey, Saint Peter’s College has less than 3,000 undergraduate students enrolled at the school. The school earned its berth to this year’s NCAA Tournament after winning the 2022 MAAC men’s basketball championship. This is only the school’s fourth appearance in the NCAA Tournament, having previously participated in 1991, 1995, and 2011.

Saint Peter’s improbable March Madness run will continue on Friday when they take on the #3 seeded Purdue Boilermakers in the Sweet 16. The game will tip-off from the Wells Fargo Center in Philadelphia at 7:09 p.m. EST on Friday night.