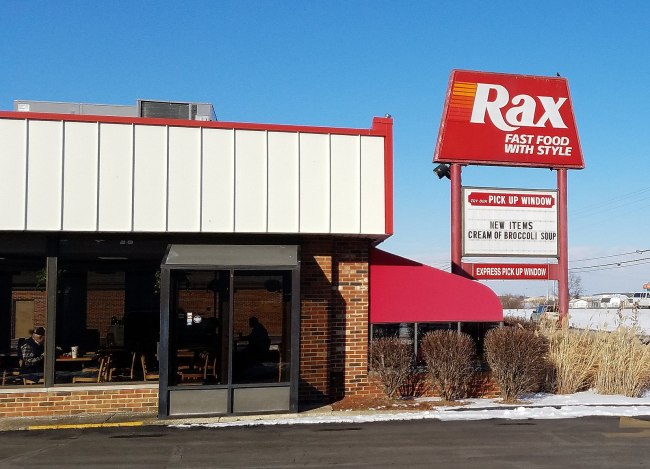 I cannot say that I remember Rax Roast Beef fast-food restaurants at all. I’m sure if my dad was here he’d call me an idiot and tell me we used to eat at them all the time when I was a little kid but I haven’t the faintest memory of them but that’s why I was intrigued by the premise of this YouTube video below.

Apparently, at its peak in the 1980s there were 504 Rax Roast Beef locations spread across 38 states in America with two more locations in Guatemala and two in Canada. For comparison’s sake, there were 2,193 Taco Bells in 1985 so this was about 25% as prevalent as Taco Bell was back then.

Rax Roast Beef was famous for its roast beef sandwiches, baked potatoes, salad bars, and milkshakes and they were apparently pretty good at advertising on TV up until the campaign that literally collapsed their entire empire within years.

I won’t spoil too much but the campaign focused around ‘Mr. Delicious’ who was meant to bring in more adult customers but it backfired and the entire marketing team jumped ship afterward and it caused the entire house of cards to come crumbling down. This quick rundown of Rax Roast Beef’s rise and fall is under 4-minutes and it’s a cool look at a piece of American history a lot of people either don’t know about or have forgotten entirely.

By 1997, Rax had merged with another brand and had then converted all of their Rax Roast Beef locations to Hardees but the merge also caused financial troubles and the next company had to file for Chapter 11.

In 2017, there were two Long John Silver’s locations that actually had Rax menus in addition to their menus but both have since shut down and Rax has all but disappeared from American culture and it all started with the Mr. Delicious campaign that backfired.