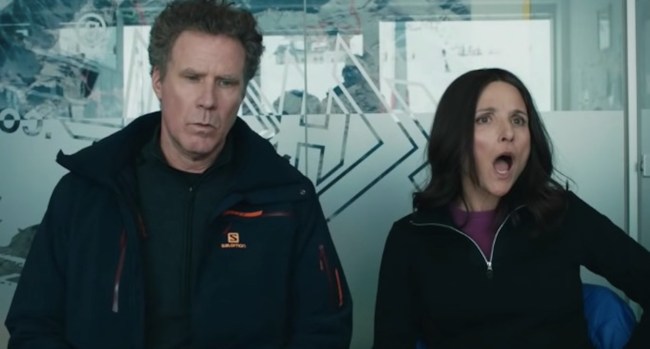 Can we just take a quick moment to heap all of the praise upon the absolute queen that is Julia Louis-Dreyfus?

Not only is the comedy legend, now 58-years-old, arguably one of the most influential actors in the history of modern comedy, but she still looks as fantastic as she did 20-years-ago.

In fact, while most of the Seinfeld cast’s careers stalled out following the acclaimed 90s sitcom series “about nothing” (not so much Jerry and Larry, more so Michael and Jason), it can be argued that Louis-Dreyfus’ cultural relevance has only exponentially increased since. Plus, let’s not forget that iconic Rolling Stone cover from a couple of years back.

Like I was saying, she’s the GOAT. So, naturally, when you combine one GOAT, Louis-Dreyfus, with another GOAT, Will Ferrell, you have the makings of what should be a home run of a comedy, and Downhill — which appears to be slightly darker than the standard Ferrell affair — looks like it will be exactly that.

Based on the Swedish film Force Majeure by Ruben Östlund, Downhill is a black comedy-drama that is directed by Nat Faxon and Jim Rash, who are known for their work on The Descendants and The Way, Way Back.

Downhill is set to hit theaters in the United States on Valentine’s Day — Friday, February 14, 2020.

Hello yes I would like to marry Julia Louis-Dreyfus please. Who do I need to speak with to make this happen? The casual 30-plus year age difference is not an issue.pic.twitter.com/Zrll3i2hXM