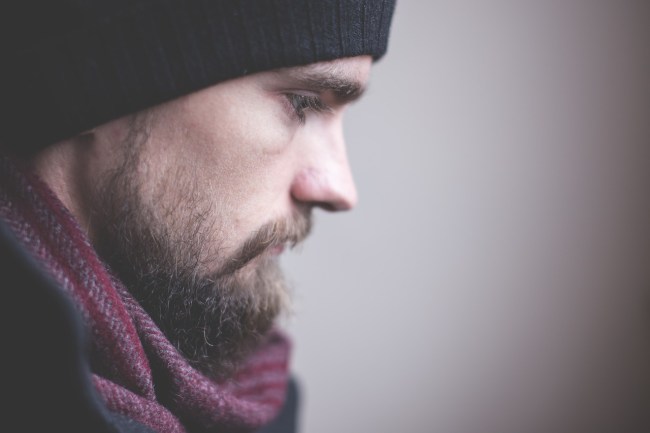 There are plenty of societal expectations men are expected to abide by, and while people are slowly realizing that dealing with problems via stoicism isn’t exactly the healthiest thing in the world, it’s impossible to deny these stigmas still exist.

Based on my extensive time on the internet, I’m sure this headline alone will be enough to make certain groups irrationally outraged, but I’m not arguing men have it worse than everyone else— it’s just that they have problems they have to deal with along with the rest of the general population.

In many cases, guys are judged if they have the nerve to express certain emotions that don’t confine to the antiquated definition of “manliness” and I think we can all agree we’re not doing each other any favors.

On Wednesday, screenwriter Caitlin Moran took to Twitter and asked guys to share the downsides of being a man.

One of the most popular responses shined a light on the lack of support many guys experience when they’re going through a rough time.

Probably the worst part about being a man is the fact that we all have real problems and would love to have support to deal with them, but once someone expresses it, he constantly gets told his problems don't exist, even when they're staring him in the face.

Another respondent emphasized how men are perceived as weak based on totally normal emotional traits.

People seeing my sensitivity as a weakness. My emotional intelligence has been preyed on as effeminate and being targeted as gay. These are not weaknesses. These are strengths and being 'in touch' with the spectrum of emotions is good.

While this is nowhere near unique to men, another person noted the downsides of the unrealistic standards guys are expected to meet.

I think women & men alike will relate to this, but I've felt a lot of anxiety over my identity as a dude as I've watched media/pop culture present ever-shifting templates of what type of guy constitutes "the ideal man."

There’s also the pressures that come with being a dad.

I would say newer fathers are trying to be very involved fathers but we don't have any models for how to do so cause previous generations allowed fathers to hide in their work or commutes! I struggle sometimes as a father of 2 beautiful boys because the map is sparse

It’s also impossible to ignore the lack of mental health support many guys are forced to deal with (which, again, isn’t exclusive to men).

What I’ve noticed more than anything is that we only ever seem to talk about men and mental health AFTER a tragedy occurs. Then we brand them psychopaths and shame them for not seeking help from a society that tells them everyday to just “man up and shut up”.

I think most guys out there would agree we have it pretty good but I think it’s important to occasionally take a step back and take a look at many of the issues that were brought up in this thread.

It’s certainly not going to hurt.