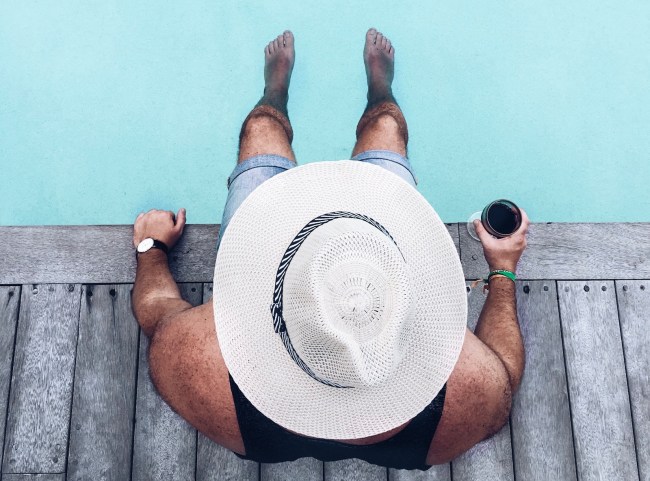 Photo by Vincent Rivaud from Pexels.com

Hammering down on cocktails during the summer months is sort of what makes the season worth living.

We spend the entire rotten winter just wishing, then begging, and finally offering up our firstborn to the gods of Master Craft and Sea Ray in exchange for brighter, warmer days.

What can we say?

We get eager as all get out to go full-on Yacht Rock, pull out our flamingo shirts and sandals and spend as many days as possible under the sun somewhere between the island of cockeyed and shitfaced.

Damn right, we do!

It sure as hell beats sitting around the house all day staring out the window at a grey world, getting the life sucked out of us one frigid day right after the next.

It’s the reason we get all giddy and shit as soon as the temperature outside breaks 65 degrees.

We get desperate for the warmth and fellowship of summer, not to mention the women, scant bikinis, and all the possibility in the world.

But then, just as we are getting into the swing of summer, Mother Nature comes swooping down to scorch the Earth like nobody’s business. We tend to forget just how hot it can get by the time July rolls around.

Well, for starters, we drink more booze to help keep us cool. We don’t know that it actually works, but we feel like we are winning the fight with an ice-cold brew in hand.

Unfortunately, this method for beating the summer heat could be killing us – and not just from liver damage either.

Come to find out the average sun-soaked drunkard is at a higher risk for skin cancer, according to a report from National Public Radio.

There has always been some relationship between alcohol consumption and the increased risk for skin cancer.

The idea is that some of us get so fucked up in our outdoor shenanigans that we often forget to apply or reapply sunscreen.

Because of this carelessness, we get more sunburned than usual, which puts us at a higher risk for developing melanoma.

But researchers are finding out now that merely forgetting the sunscreen isn’t the real reason that summertime partiers are running with this devil.

Some of the latest studies show that alcohol decreases the amount of time a person can spend in the sun without getting burned.

Those dangerous UV rays that are proven to wreak havoc on a person’s skin become amplified when booze is at play.

Although there is no real definitive evidence at this point showing exactly why boozehounds with an affinity for the outdoor life are more susceptible to skin cancer, researchers believe that it has to do with something called Carotenoids.

These are the pigments that are produced through the consumption of fruits and vegetables. They are said to have an antioxidant effect that helps protect the body against UV rays.

But these pigment levels take a nosedive when alcohol is tossed into the mix.

Researchers believe the booze strips us of this shield and opens us up to sun damage.

Other studies throughout the years have turned out similar results. But many health experts seem to think that more factors are involved than just weaker carotenoids.

So eating the celery stick out of that Bloody Mary isn’t going to make you any less vulnerable to a UV beating.

Some of the latest statistics show that nearly 8,000 people will die from skin cancer in 2019.

People with blonde or reddish hair are more likely to suffer this wrath, and the majority of these cases are, in fact, brought about by sun exposure. What sucks is these numbers are increasing each year.

Over the past decade, melanoma cases have risen by around 54 percent.

Researchers believe the uptick might have something to do with summertime booze consumption.

“The added risk of sunburn with alcohol is probably one of the contributing factors to the [higher] rates of skin cancer [among] people who drink [alcohol],” said Aaron White, a senior scientific adviser with the National Institute on Alcohol Abuse and Alcoholism.

It is essential to point out that not only pale-skinned mofos are at risk.

And while we would be the last to preach about curbing one’s alcohol consumption this summer to stay cancer-free, we are hardcore believers in the power of sunscreen.