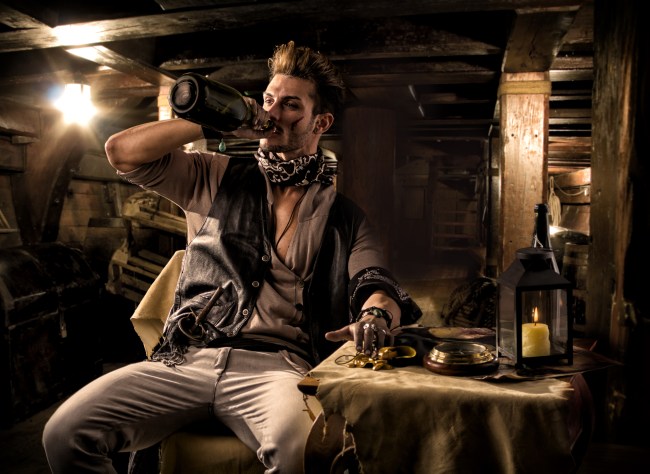 Anyone who has ever heard the old saying “drunk as a sailor” might be under the impression that the phrase originated from the countless stories of shore leave in which sea-mad Navy men would step out on dry land and wreak havoc on the locals through a booze-soaked tapestry of bar fights and self-loathing.

This particular division of soldiers has built a crude reputation for going off the shit-faced charts the moment they hit stable ground. But this has little to do with how sailors became recognized as the most inebriated bunch of bastards in the military. In fact, these guys, regardless of who much they poured it on, were actually more susceptible to the effects of alcohol on the water than they ever were in the streets of the concrete jungle. It is for this reason that law enforcement agencies always emerge during the summer months to warn seafaring slobs not to get too sloshed on the lake.

“Alcohol could have a greater effect on you on the boat than it would be sitting in your living room watching a football game,” Tennessee Wildlife Resources officer Anthony Chitwood told NBC-affiliate KARE-11.

But this extra-buzz is not a supernatural occurrence. It’s not like downing a cooler full of beer on a floating vessel automatically increases a person’s blood alcohol level. Sadly, this method alone will not afford anyone a cheaper day of drunken debauchery. The amplified effects that come from boozing it up on the water actually transpire through various common factors, according to the U.S. Coast Guard.

“Exposure to sun, wind, rain, noise, vibration and motion – “stressors” common to the boating environment – intensify the side effects of alcohol, drugs, and some medications,” the USCG website reads.

But it is the sun that is the biggest problem for avid boaters. Anyone who has ever been out on the water for hours with that giant orange ball of fire beating down on them understands that this particular element can have a devastating impact on good times. It burns the skin, it is blinding, and it does its damndest to suck all of the essential fluids out of the body. Dehydration is the most detrimental side effect of being out in the heat for hours on end. This is something that plagues boaters even when they are not consuming enough booze to, well, sink a ship. Research shows that “dehydration has a number of effects that cause greater intoxication.”

So it stands to reason that if a boater is not kicking back the occasional bottle of water in between every third or fourth beer (and very few do), they are going to feel a little more buzzed-up than if they were riding a barstool in an air-conditioned tavern.

But, if we’re being honest, the concept of getting drunker under the sun is something that probably doesn’t concern most of the wave riders, tubers, water skiers or pontoon socialites ripping it up on American waterways with vicious intent before summer comes to an end. After all, there is always plenty of time to hydrate at a nice restaurant or bar & grill after sun goes down. And, if not then, there is always the winter months. Humans can survive without water for three days, so, you know, there is time.

Then again, back in the early ages of water travel, sailors used to consume more alcohol each day than water. And when they did find a gulp or two of this vital fluid, it was usually mixed with some kind of hard liquor. It wasn’t safe to drink water any other way. Booze acted as a sanitizer. Otherwise, sailors ran the risk of being snuffed out by all sorts of nasty bacteria. In fact, most of the fresh water found on boats was typically used for cooking, not hydrating. So, considering what it took to survive on the high seas, sailors had no choice but to stay plastered. This is basically where the phrase “drunk as a sailor” comes from.

So if the soldiers of the old school could operate hammered drunk for extended periods of time under the sun without dying off from dehydration (which we are positive that some did), surely you lightweights can survive a few beers on the boat this weekend.