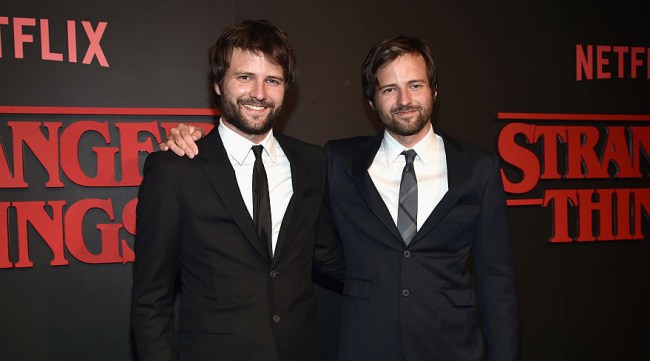 Earlier this week, news broke of a lawsuit against the Duffer brothers, creators of Stranger Things, by a filmmaker who claimed the 34-year-old twins jacked the script, idea, and story from him when he pitched them back in 2014. It was difficult to decipher whether Charlie Kessler’s allegations held water or if he was trying to cash in on the success of the show.

Well, it appears now that Matt and Ross Duffer are calling this dude’s bullshit after their lawyer called Kessler’s claim “completely meritless.”

TMZ has obtained emails demonstrating that the Duffer Brothers were developing a Montauk series as far back as November 2010 (the series was rebranded to Stranger Things after the production crew came to the realization that it would be miserable to shoot in Montauk during the winter).

In 2 emails in November, 2010, the brothers set out their vision … a “real,” “paranormal” “gritty eighties” show. In one of the emails, it specifically says the show is set in Montauk. There is a reference to “the Montauk experiments.”

A Google document dated October, 4, 2013, would become the premise for “Stranger Things” … “Benny (renamed Will for the show) leaves his friend Elliot’s house, a bunch of kids are there, eating pizza, dungeons and dragons … Benny leaves on bike, hears voices, goes into strange world, taken by some evil force.”

Two emails from 2014 — February 27 and April 4 — both written before the alleged meeting between the Duffer brothers and Kessler, lay out the vision for the show. It reads, “…set in 1980s Long Island” with “a vintage Stephen King feel.” The April 4 email mentions a location scout in Montauk.

The lawyer for the Duffer Brothers tells TMZ, “These documents prove that Mr. Kessler had absolutely nothing to do with the creation of ‘Stranger Things.’ The Duffer Brothers were developing their project years before he claims to have met them.”

Kessler’s accusations aren’t totally fraudulent–produced a short film called Montauk, which premiered in 2012 and won an award at the Hamptons International Film Festival. The film centers around the search for a little boy and the secret government experiments exposed as the search unravels.

Early bird gets the worm, bruh.