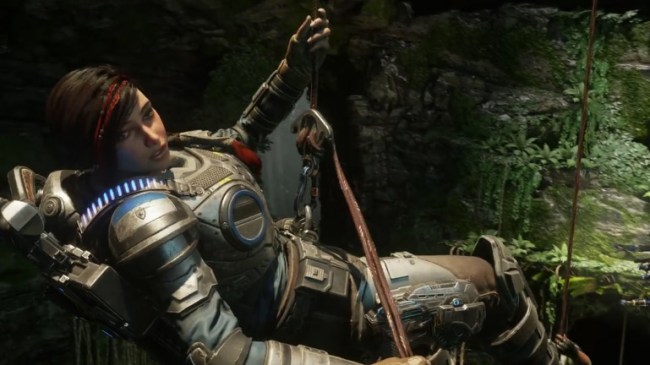 Not sure how we are going to be able to find the time to play all of the ridiculously good-looking video games that are being announced at E3 2018, but it will sure be fun to try.

We have already seen new trailers and footage for upcoming titles like Halo Infinite, Fallout 76, Crackdown 3, Dead Or Alive 6, and Rage 2. But that was just the tip of the iceberg.

Now we also get our first looks at games like the forthcoming Gears 5, The Elder Scrolls VI, DOOM Eternal, Devil May Cry 5, and The Division 2 along with the first gameplay video for Shadow of the Tomb Raider.

As Kait, journey across the biggest, most beautiful Gears world ever created. Play solo or with a friend in local split-screen co-op, or online co-op and experience every mode in 4K Ultra HD resolution with stunning HDR at a smooth 60 frames per second. Gears 5 will be released in 2019 on Xbox One and Windows 10 and will come to Xbox Game Pass on the same date as its global release.

As the DOOM Slayer, return to take your vengeance against the forces of Hell. Set to an all-new pulse pounding soundtrack composed by Mick Gordon, fight across dimensions as you slay new and classic demons with powerful new weapons and abilities.

Years have passed since the legions of hell have set foot in this world, but now a new demonic invasion has begun, and humanity’s last hope will rest in the hands of three lone demon hunters, each offering a radically different play style.

In The Elder Scrolls: Blades you are member of the ancient order of the Blades. Forced into exile, you seek refuge in your remote hometown only to find it reduced to rubble. Now, it’s up to you to restore your town back to its former glory.

SHADOW OF THE TOMB RAIDER (Gameplay)

As she races to save the world from a Maya apocalypse, Lara must master a deadly jungle, overcome terrifying tombs, and persevere through her darkest hour before being forged into the Tomb Raider she is destined to be.

Lead your squad to victory with new ways to turn the battlefield to your advantage. Assemble your Company of customized soldiers, weapons, and vehicles – then take them on an epic journey through the Tides of War. Experience the most intense, immersive Battlefield yet. You will never be the same.

Tom Clancy’s The Division 2 is an online open-world, action-shooter RPG experience set in a collapsing and fractured Washington, D.C. This rich new setting combines a wide variety of beautiful, iconic and realistic environments where the player will experience the series’ trademark for authenticity in world- building, rich RPG systems, and fast-paced action like never before.

Wolfenstein: Youngblood introduces the next Blazkowicz generation to the fight against the Nazis. Play as one of BJ’s twin daughters, Jess and Soph, as you search for your missing father in Nazi-occupied Paris.

And Don’t Miss The Biggest Xbox Sale Of The Year: Discounts On Consoles, Games, And Even The Xbox One X!