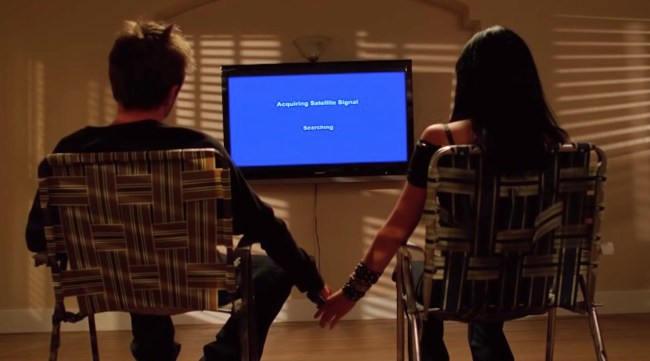 Earlier this week, Netflix released an heart-string-tugging teaser for El Camino that tracks the, uh, tumultuous journey of Jesse Pinkman thus far. And while the teaser video is seriously light on significant plot details, it may include clues about what may happen in El Camino below the surface.

The video — titled “ENCHANTED” By Chloe X Halle — follows Jesse Pinkman from the early days of cooking crystal in the RV to his final scene of El Camino-induced freedom in the Breaking Bad series finale.

And while the visuals in the video may not teach us anything new about El Camino, the audio just might.

The song featured in the video, “Enchanted”, has actually been used in Breaking Bad before, albeit by a different artist: in episode 11 of season two, when Jesse takes heroin with Jane for the first time, the song “Enchanted” by The Platters plays as he rises towards the ceiling in an opioid-induced stupor.

As Esquire aptly points out — and as fans of Breaking Bad should already know — the song choices used throughout the iconic series are almost always alluding to what’s happening in the scene that the particular song is scoring (think Badfinger’s “Baby Blue” that closes out the final scene of the series):

The choice of “Enchanted” works in a similar way. We know that Jesse was haunted by Jane’s death throughout his Breaking Bad tragedy. Her death changed him.

Shortly after Netflix accidentally leaked the announcement of its own movie, Aaron Paul shared a scene that he wanted fans to re-visit before El Camino. It’s the scene from the seventh episode of Season Three. Walt visits Jesse in the hospital after he gets the shit beaten out of him by Hank. Jesse tells Walt: “Ever since I met you, everything I’ve ever cared about is gone. Ruined. Turned to shit. Dead. Ever since I hooked up with the great Heisenberg. I have never been more alone. I have nothing. No one.”

What Jesse is referring to here is Jane’s death. And that, combined with the musical reference of “Enchanted” must mean that Jane’s death will loom large over what’s happens to Jesse in El Camino. [Esquire]

Given that Pinkman’s life has essentially been an endless stream of misery ever since we met him, it stands to reason that El Camino may focus on how a person that broken can even begin to pick up the pieces.

And just for good measure, here are the lyrics to “Enchanted”:

Living is a dream when you make it seem enchanted
Lovers take for granted all the world’s aglow, they ought to know
When you touch a star then you really are enchanted
Find a seed and plant it, love will make it grow

It’s really grand when you stand hand in hand with your lover
And thrill to the wonders of night
And days, too, will amaze you and soon you’ll discover
Your dreams run to dreams in continuous flight

Love is ecstasy, it’s divine to be enchanted
When your dreams are slanted through a lover’s eyes

It’s really grand when you stand hand in hand with your lover
And thrill to the wonders of night
And days, too, will amaze you and soon you’ll discover
Your dreams run to dreams in continuous flight

Love is ecstasy, it’s divine to be enchanted
When your dreams are slanted through a lover’s eyes