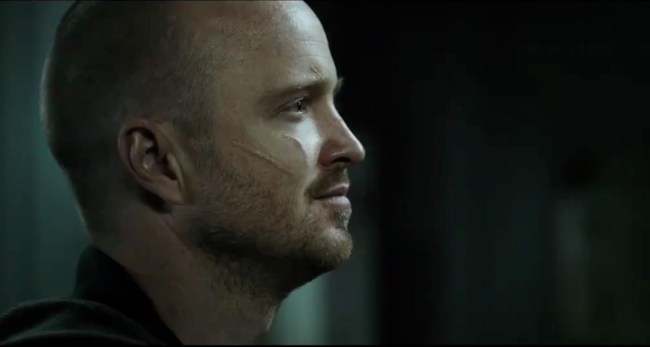 Unlike the first few trailers, the new trailer offers our a full, in-depth look at the newly escaped Jesse and reveals more details about the film’s potential plot, particularly that Skinny Pete — who claimed to be clueless about Jesse Pinkman’s whereabouts in the announcement teaser — is very much involved in his friend’s escape from the law.

MORE: Breaking Down Every Scene In The Stunning ‘El Camino’ Trailer

If that doesn’t make the hairs on the back of your neck stand upright or the blood from your heart pump a little faster, I actually feel sorry for you. Everything — from the cinematography to the mood to the score to Pinkman’s horribly scarred face — is just perfect.

There’s a corner of the internet that has been loudly — and, to be fair, understandably — wondering if El Camino will be a victim of its own massive expectations and therefore will end up being a disappointment, but after seeing this trailer, it’s tough to deny that series creator Vince Gilligan is still very much at the top of his game and only returned to the franchise because he had something he really wanted to say about these beloved characters.

In addition to Pinkman, Skinny Pete, and Badger, Jonathan Banks — the actor who plays Mike Ehrmantraut — also let slip that he will be appearing in the film.

And as we all know, given what happened to Mike at the end of Breaking Bad, any appearance he makes would be in a flashback. And if *Mike* is appearing in a flashback, then there’s a very, very good chance that another iconic character will be making an appearance, too.

Also, P.S., not to get anyone’s hopes up or anything — as Breaking Bad has taught us many times before, that’s a very foolish thing to do — but by the tone of the trailer, it seems as though Pinkman may find some sort of peace or redemption after all.